Some early writing from an artist residency with Elan Links, in the Elan Valley, Wales. This upland landscape is dominated by a cluster of reservoirs - some over 100 years old - built to supply water to the city of Birmingham, in the midlands of England. 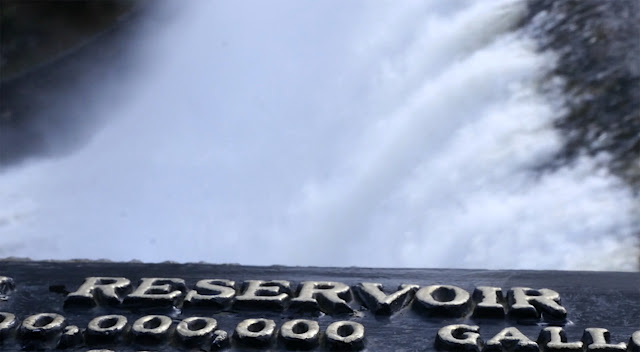 The first opportunity to share work emerging from this residency has been provided by the 'Ten Acres of Sound' festival organised by the Artefact co-operative in Stirchley, Birmingham.

This is an entirely appropriate setting, as the purpose of the creation of the Elan Valley reservoir/dam/pipeline system in the early 1900s was to supply water to the rapidly growing city of Birmingham. Fittingly, my installation is hosted by the Birmingham Brewing Company, emphasising this watery connection and dependency. Under the title 'Also listening with my eyes', there is a programme of six short 'video-sonic poems' on-show. These are works-in-progress from the Elan artist residency. Below I have extracted text and images from the exhibition:

Returning to Birmingham neighbourhoods for the first time since studying here in the late 80’s, I set out to weave together field recordings (video and sound) from the local River Rea trail and the distant Elan Valley in Wales - the source of Birmingham’s water supply. Through different seasons of the year, my aim has been to walk these waterways, hills, valleys and along pipelines - tuning-in, listening, observing and reflecting.

With a varied hybrid background (ecology, art, landscape design, environmental science), I now create installations using video, sound, photography and sculpture. Valuing patience, serendipity and spontaneity, the approach is poetic (or ‘geopoetic’), and also kinaesthetic - relying on the experience of 'moving through’ physical spaces and landscapes. It is also about seeing and hearing with different - outsider - eyes and ears. In that way, perhaps shifting the lens and reflecting back some strangeness or unfamiliarity.

For ‘Ten Acres Of Sound’, field-recordings were manipulated and meshed together to produce a series of 6 short video-sonic works, each 5 minutes in length.

Some underlying themes are:
- Water, and waterways; the preciousness of water (and need for protection); water as a gift, and much more than simply a substance that comes out of a tap.
- Landscapes, people, nature and ecology, with a special focus on entanglements with other (non-human) dwellers, observed at different scales.
- What do we do, and how do we act, next to water? What is this enduring attraction?
- Questions about commodification, control, commons, freedom; wild water and 'tamed', domesticated water (and parallels with wild/tamed nature, and wild/tamed humans?).
- Outsider/insider; being a stranger; native/non-native.
- Water and connection; water and separation/conflict; also as weapon.
- Underground waters, and undercurrents.

The individual sample pieces can be viewed via the festival webpage, and are described here: 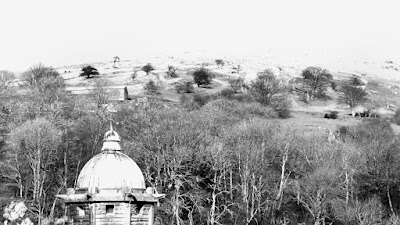 The title 'Between Two Waters' has a number of connotations. On one level, the experience of being, and moving, in any landscape is situated between the moisture of sky (mist, fog, cloud, snow, hail, dew etc) and the subsurface waters (aquifer, groundwater, bog-water, soil-moisture etc). Often these waters are invisible, but are still very much part of our lives and ecological dynamics.

In the Elan Valley, the cottage provided for the artist-in-residence also sits between the Elan River valley and the River Wye, within the historic 'commote' (commons) of Cwmdeuddwr ('commote between the two waters’). Birmingham Corporation took over the entire catchment of the Elan Valley in 1892, purchasing all rights of common, 'to the exclusion of all others’. Creatively exploring these Welsh waters and also the River Rea in Stirchley meant that I was navigating 'between two waters'. This perspective is further enhanced by field excursions to parts of the 73-mile pipeline that connects the two places. In another way, the recording (both video and audio) references a place 'between two waterscapes' - the once farmed and forested landscape of the River Elan, now obscured under the Pen y Garreg reservoir.

Travelling further on an imaginative path, I see this 'video-sonic poem' as also suggestive of a deep-time story. The momentary 'white-out' of the landscape by a brief snow storm alludes to the eventual covering (re-covering) of this place by the expanding ice-sheets of the next 'ice age'. Today, we live in an inter-glacial time, but the terrain of these valleys was formed during the last ice-age. We are in-between these frozen waters.

H2O AND THE WATERS OF FORGETFULNESS 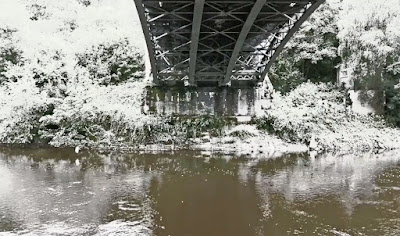 The title of this 'video-sonic poem' echoes that of a book by Ivan Illich which delves into two very different modes of relating to water. The common (modern/functional) way is to view water as simply a domesticated commodified substance that comes out of a tap (or bottle) - to be used for drinking, washing, bathing, industry, beer-making etc. In his book, Illich also explores other, older, elemental perceptions of water and the shift in how we view urban space, water supply and sewerage. Illich swims in different streams of consciousness and ended 'H2O and the Waters of Forgetfulness' with:
“H2O is a social creation of modern times, a resource that is scarce and that calls for technical management. It is an observed fluid that has lost the ability to mirror the water of dreams. The city child has no opportunities to come in touch with living water.”

There are other aspects of water (management) that I'm hoping to include in the context of this (unfinished) short video. One of these relates to water disputes and conflict; or even the actual weaponisation of water held in reservoirs. The dams of the Elan Valley played a part in the preparation for the 'dambusters' aerial bombing in Germany's Ruhr Valley in WW2. In the early 1950s, the US attacked North Korean dams on the Yalu River and destroyed the Hwacheon Dam to cause flooding. In the 1960s, The US extensively destroyed dikes and irrigation systems in Vietnam and used 'cloud seeding' to cause flooding. Similarly, water releases from dams on the Euphrates River in Syria have been used for war purposes.

The mention of Syria segues from 'water displacement' to 'people displacement' (refugees, migrants). Whilst walking the River Rea trail in Stirchley, and encountering examples of 'invasive', 'non-native' plant species (some featured in the video), I have been pondering the resonances of the use of such language in social contexts, as well as in the nature conservation world. 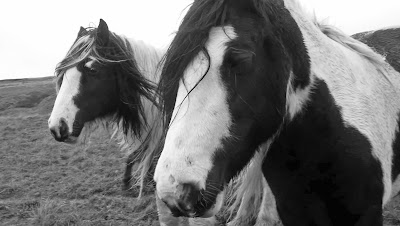 #Horses #Water #Slate
Hws - horse-cloth, covering (Welsh)
H.W.S. Harriet Westbrook Shelley, who, with poet Percy Bysshe Shelley stayed in the Elan Valley in 1812, and sought in vain to make a permanent home there.

The focus is a herd of feral horses who inhabit, or dwell in, the upper Elan watershed. This is their habitat, and they range over a very wide area. Their freedom to roam is enabled by an interesting aspect of the legislation that established the ownership and management of the Elan water catchment over 100 years ago. One stipulation was that the whole area would remain free from fencing.

"Fencing of the open hill land is precluded by Section 53 of the 1892 Birmingham Corporation Water Act which gave to the public 'a privilege at all times of enjoying air exercise and recreation' over the open hill land. This was effectively the right to roam over 100 years before its introduction through the Countryside and Rights of Way (CROW) Act." www.elanvalley.org.uk/discover/farming 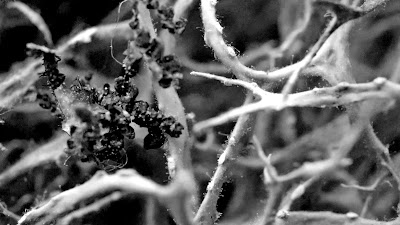 Macro-photography from the upper zones of the Elan Valley watershed/catchment.
Soundtrack assemblage derived from selected audio extracts from my recording of the play, The Valley of Nantgwyllt, by Peter Cox, performed in Feb 2020 at the Rhayader Leisure Centre, by Rhayader YFC.

Roadside Picnic is a Russian science-fiction novel by Arkady and Boris Strugatsky, written fifty years ago. It describes one of six zones visited by alien landings (during 'The Visitation'), all of which subsequently exhibit strange forces and unexplained phenomena. The 1979 film Stalker, directed by Andrei Tarkovsky, is loosely based on the novel.

‘Ostranenie’ is also Russian - a term meaning 'seeing the familiar in a strange light'
My experience of delving into the micro world of mosses, liverworts and lichens was evocative of entering an alien landscape - with its strange forms and colours. On the one hand, this type of upland bog landscape is very familiar to me, but the change of scale renders it unfamiliar and fascinating. A re-enchantment perhaps?

In a related way, the soundtrack takes sounds familiar to the cast of the play and, via very simple manipulations, aims to achieve a defamiliarization.

Most of these macro-photograpjy images are from the rotting remnants of the wooden posts that once fenced-in a series of rain gauges, originally constructed by Birmingham Corporation. 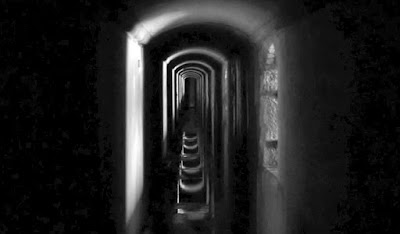 Anastomosis:
an interconnection between two channels, cave or pipework systems
(medicine) the surgical creation of a connecting passage between blood vessels, bowels or other channels
the insertion of one word within another, as in "underdarkneath" (James Joyce)

An exploration of the atmospherics of working and being in underground waterworks. Video and audio recorded in waterworks in my home-base of Bristol and at the Elan Valley dams in Wales, source of Birmingham's water supply. Included in the soundtrack are pre-natal heartbeat recordings from various sources, including my own daughter’s. 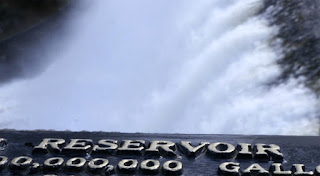 Part of the video is filmed from inside one of the Elan dams, looking out through the water torrent. In the Elan Valley the 'technological sublime' has largely supplanted the 'natural sublime' that the poet Shelley (and many others) found and celebrated here.

The sublime spectacle of the Elan dams in full flow is communicated in this short video-sonic piece. But an extra audio layer has been introduced - featuring a chorus of birdsong - birds that would have been commonly heard in this forested valley in the pre-dam era (and even more so in the pre sheep-farming era).
[samples include the common Blackbird, Crow, Wren, Chaffinch, Chiffchaff, Dunnock, Thrush, and the less common Black Redstart, Redwing, Pied Flycatcher and Fieldfare]

For me, the nature of this piece resonates with something written about the Niagara Falls:
"It does not look like water, or even feel like water. Most present is the tremendous rumble, a roar of flowing Earth. This precedes all other perception... A violent, rough course of dynamite and explosions made this..." David Rothenberg

Some birdsong samples provided by the RSPB, and from a number of Creative Commons sources: