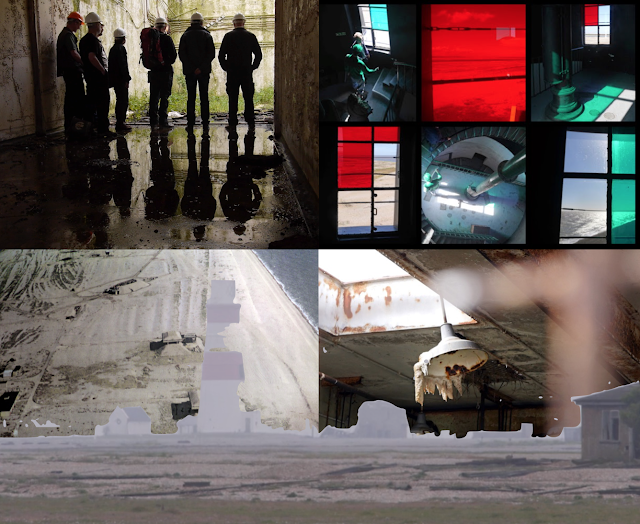 “Nothing is weaker than water,
But when it attacks something hard
Or resistant, then nothing withstands it,
And nothing will alter its way.”
Tao Teh Ching (via Bruce Lee)


Sensitive Chaos * - flow, change and futures on Orford Ness  From April to October 2019, the National trust site of Orford Ness (UK) will be hosting works by environmental artist, Antony Lyons. As a creative researcher attached to the Heritage Futures academic project, Lyons creates ‘geo-poetic’ responses to landscape situations that are ‘in-between’, and undergoing transformation. The presented works reflect his explorations with people and landscape, based on visits over the past two years. Working with invited participants, he will use image and sound installation to give exposure to human, non-human and biophysical aspects of this unique place.


The Setting  Orford Ness is a place with a constantly changing landform anatomy - shifting, drifting, migrating via longshore drift; undergoing a churn of simultaneous loss and creation. Lyons’ creative research explores some of the past, present and future dynamics that are entangled with both natural and social forces of erosion, adaptation, sustainability etc. In his project, there is an attention to the interplay between ephemerality and permanence. As a coastal site, with sea and weather forces acting as the major agents of change, the sinuous fluidity of the form of the shingle spit of Orford Ness is observable even within our short human time-frames. In a single generation, major re-shaping and disturbance occurs. Accepting these changes involves more than simply ‘letting-go’. Instead, it is about finding ways to find coherence, and to slipstream, with change itself. Plant-life, water flows, weather patterns, climate changes etc. all have unpredictable and unmanageable ways of their own.

Through most of the 20th century, the Ness was a landscape of exclusion, a secret military test-site. Now much of the shingle spit is managed by the National Trust and its status is primarily a protected heritage zone. It is an area of special nature interest - an SSSI, with vegetated shingle habitat; and a Ramsar wetland site. It is also important for its military history and Cold War heritage. In addition, on the Ness, there is the privately-owned, decommissioned Orford Lighthouse and an extensive ex-military radio-listening zone called ‘Cobra Mist’. These are just some of the threads that will weave together in the tapestry of the future.

Sensitive Chaos reflects on the slow shifting and drifting the landform, the materials, and the anchors of identity, or belonging. Through this lens, particular historic structures or buildings are a blur; instead the primary focus is on phenomena of flow, growth and change. Despite the physical 'heaviness' of some of the monumental concrete structures, and their historical resonances, the overall human imprint here is relatively light-touch, and will, in time, crumble and dissolve away. The immense concrete structures are slowly transforming, as evidenced by the presence of calcium carbonate stalactites and stalagmites. The shingle will endlessly continue in its pattern of longshore drift. The extensive ‘reclaimed’ marshlands will eventually be transformed by rising seas. Animal life, including the recently arrived Chinese Water Deer and Reeves’ muntjac, may thrive. Meanwhile, the plant communities that cling to the inhospitable surface of the slowly shifting ridges and waves of shingle are likely to outlive any human influence or even presence. Over geological time, the dance of transgressing seas and ice-age melting episodes will once more inundate this coastal zone - destined to share the fate of the drowned world of Doggerland, with its mammoth, elephant and horse bones, now lying off-shore under the waters of the North Sea.

Orford Ness exhibits a heritage of battling; against the sea (‘holding the line’ to protect the lighthouse, the marsh-grazing lands and the military complexes); battles also to keep open the estuary shipping channel, for trade. The place is deeply entwined in the making and testing of weapons of war. In part, there is a desire to hold on to artefacts of the military heritage. This is motivated by military-industrial heritage study and preservation, but there is also a fascination with a unique landscape aesthetic that some describe as ’post-apocalyptic’ and a place where some visitors feel a therapeutic sense of escape into a refuge of otherworldliness. Characterised by this particular sense of drama and atmosphere, Orford Ness plays a role as a ‘dark tourism’ destination. There is little escape from the resonances and reminders of destructive impulses and warfare (including nuclear war). It is a landscape of flint (shingle) and steel (debris). The site is littered with bomb craters, rusting mangled metal, razor wire, melted glass and signs warning of ‘Unexploded Ordnance’. The existing interpretation exhibit features an atomic bomb casing. The vegetation itself echoes this violent history, with the common occurrence of Rosebay Willowherb (also known as ‘bomb-weed’), a typical first coloniser of of bomb-sites.

Limbo Landscapes Lab  This project is happening in three landscapes, or ‘edgelands’, that are undergoing substantial transformation, involving decay/decline and forms of ecological regeneration and recovery. All three landscapes are also study sites for the connected Heritage Futures research project. On Orford Ness, in the ‘post-military’ landscape, concrete, metal, cobwebs, brambles and growing numbers of animals intertwine with people, conservation, tourism and heritage management. One of the other sites is an active ‘rewilding’ area in eastern Portugal. It can be seen as ‘post-agricultural’ as it is experiencing rural de-population, and is transforming towards a more ecological future. Another location is the kaolin/China-clay mining area in Cornwall, large parts of which are now ‘post-mining’ and are gradually re-naturalising. What links these three sites is a shift away from industrial - or military - use to a new relationship where humans, non-humans, and geography intertwine and engender hybrid futures. In these limbo landscapes, how do we relate to place, to animals, to plants - in new ways, rooted in dynamics of deep-time elemental and ecological forces; and the microcosm and macrocosm patterns of Sensitive Chaos?

Heritage Futures  ‘Transformation’ is one of the core themes of the closely linked Heritage Futures research project. What are the future legacies for heritage, for disturbed and transitional landscapes…and who determines? Living with transformation on this morphing coast necessitates living with very fluid hopes and visions for the future. As with the other two study landscapes, there are diverse, and sometimes oppositional, visions and plans. Tuning-in to geo-poetic imaginings can play a part in the illumination of new paths. Using the multiple narratives at play on Orford Ness, and incorporating diverse influences, Lyons’ installation works use imagery, metaphor and speculation in responding to the situations. He immerses himself in the shadows and undercurrents of the edgeland localities, whilst also reflecting on connotations and ripples in the wider world.