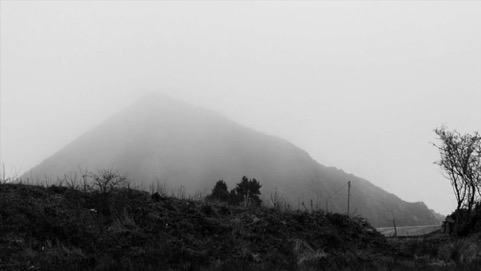 Assembling human and non-human stories in a transforming landscape


“It is the children born now who will see if
we humans can turn it around…can re-balance?
It’s not us. We’ve messed it up.
They will fix it…or they won’t.
I would like to be around in 75 years’ time to see
which way it will go; what they do; what is done to them
…but I won’t be there”
(a worker at Wheal Martyn, Aug 2018)


a) DEEP-MAPPING in the mists of DEEP-TIME

"This film is time-compressed. I recorded it - hand-held - for over 30 minutes, from the shelter of my trusty mobile studio/campervan. The circumstance was happenstance, serendipitous. The occasion presented itself after many visits, over the course of a year, in the environs of the Sky Tip mound of mining waste outside St Austell in Cornwall - the centre of the long-established industry of kaolin mining. The Sky Tip has slowly, yet inexorably, inserted itself on my radar, and also now it is the focus for a project by a group of photography students - from the local Poltair School - with whom I’m working.


The effect of the Sky Tip is partly due to its strong visual presence - its distinctive outline being clearly visible on the horizon when viewed from high ground over 20 miles away. Beyond the dominating presence and the part it plays in forming the local landscape character, there are the strong personal attachments it evokes. For some it is a marker of a lifetime of work ‘winning the clay’; for others, a symbol of proud Cornish identity to be emphasised by flying the flag with the white cross of St Pirian at the summit; and for many young people of St Austell, it is a place of freedom, an in-between zone, a wild space of escape.

For me, it also carries echoes of another huge artificial mound of rubble in southern England, namely the neolithic Silbury Hill near Avebury in Wiltshire - separated by hundreds of miles and by thousands of years. Silbury is more rounded now, but it’s dimensions are very similar, and - as in the case of the Sky Tip - the ‘positive’ form of the mound is partnered by the ‘negative’ void of the pit. At Silbury, this void space is a sculpted depression, water-filled in winter, that has been speculated by some to form a vast pregnant female shape. The flooded pit next to the Sky Tip can likewise be a site of speculation and fantasy. Aerial photos reveal a cross-shaped earthwork in the lake, somewhat reminiscent of the famous land-art earthwork ‘Spiral Jetty’ by Robert Smithson in the salt-lake of far off Utah. Could the inspiration for the water-framed earthwork here at the Sky Tip be a reference to the symbolic cross often flying at the summit?

Coming back to the film, where the rolling mist is a fortuitous echo of a film I made in another in-between, limbo landscape. This was filmed, also for 30 minutes, on the Suffolk coast, and features the now defunct Orford Ness lighthouse appearing out of the mist, and then fading back into the white-out oblivion - a metaphorical ending that resonates with the destiny of the lighthouse. The coast here is shifting, receding, and the Orford Ness lighthouse will be removed by erosion and wave action within a few years.

More recently - in the third landscape involved in this creative project (Evening In Arkadia/Heritage Futures), storm-cloud conditions provided an opportunity to similarly film the Côa Valley in Portugal. Not threatened with erosion or oblivion just yet, it was however facing inundation by the large Foz Côa dam project in the 1990s. The reservoir would have drowned the extensive and hugely impressive prehistoric rock-art engravings found in the valley bottom. The protests to save the valley and its precious archaeology were successful, and now it is a place where both ancient animal life (as represented in the rock-art) and contemporary wildlife (enhanced by an expanding ‘rewilding’ project) are celebrated. While out filming, my desire to capture the misty valley conditions for a full 30 minutes was however cut short by the increasing vigour and intensity of the storm, accompanied by torrential rain and lightning - a reminder of the elemental watery forces that will endlessly form and reform these landscapes over the course of deep-time.”
A. Lyons, Aug 2018 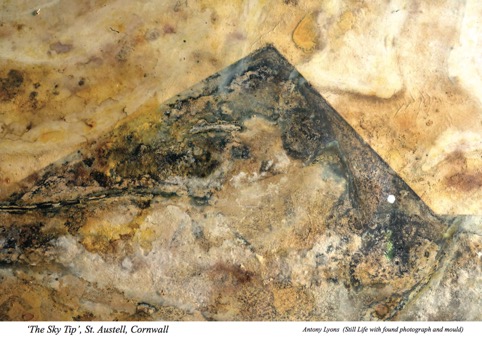 c) ALL THAT IS SOLID…

Everything washes away
Disappears in the mist (of time)

Water and vegetation act in concert
- both powered by the sun - shaping and
re-shaping this land.

Human insignificance. Not in relation to an
all-powerful god, but in the face of universal,
planetary processes. 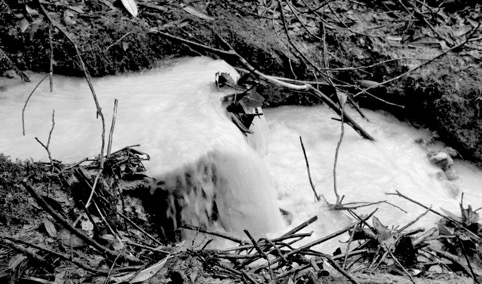 Vanishing point
“Are we there yet?” 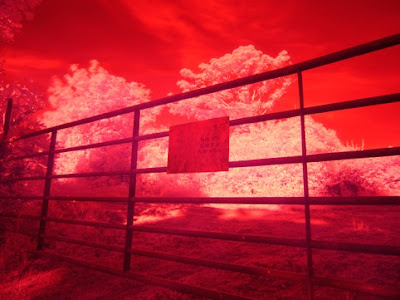 e) EVENING and the IN-BETWEEN

In-between
A limbo-land
A hybrid space and place

There is uncertainty, nebulousness, transition, transgressive-ness

Limbo and liminal; What’s the difference?

In-between past and future
The future will not be like the past
The future is hybrid; a collision of sub-atomic particles and a Heisenberg uncertainty

The future is the shape of an amoeba…searching.
Or is this the present? 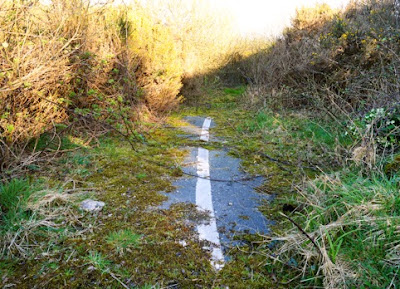 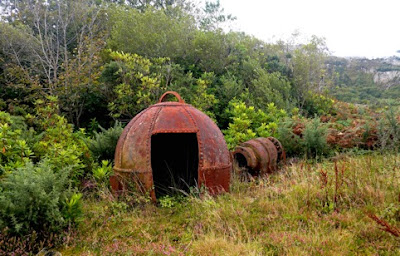 The claylands are a mosaic of refugia
There are Monkey-Puzzle forests transplanted
from Chile.
There are Rhododendron forests from Iberia
Fuchsia from the Caribbean
Montbretia from the grasslands of southern Africa
And Madagasgar

What is the colour of the future? 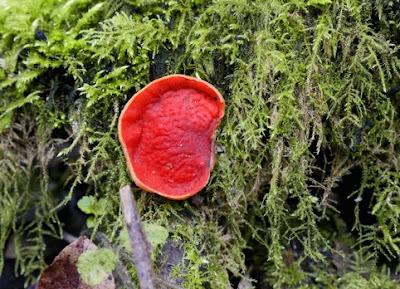 Fungus and bracken heal the wounds

Fungus and bacteria re-create the soil
The soil scraped away (to where?)
Scraped away to win the clay

Fungus is a bogeyman


“Plants make up about 80% of all
biomass on Earth. Bacteria comes in second
at 13% and fungus is third at just 2%” 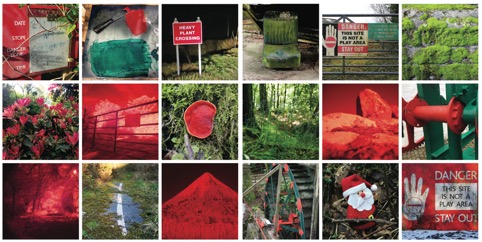 Episodes of the sci-fi TV series ‘Doctor Who’ and
‘The Hitchhiker’s Guide to the Galaxy’ were filmed here in the local china clay pits.
The attraction was the appearance of an eerie, unearthly, alien (lifeless) landscape.
Plus the ability to set-off explosions.
These abandoned clay pits are now developing a covering of vegetation - ruderal species that are the first to colonise bare rock and clay.
Another reminder of the inevitable ‘taking back’ of the land, of human structures, roads, objects etc. All will be enveloped in green.
We are in the Anthropocene
We are in the collapse
We are in the renewal
Is there a phoenix in the ashes?
Is there a green heart in the fire?
(a green heart of glass that is not Uranium)

What is the colour of the future?


i) WORDS and STONES

“Oh for a beaker full of the warm south”

Oh for a beaker full of becquerels 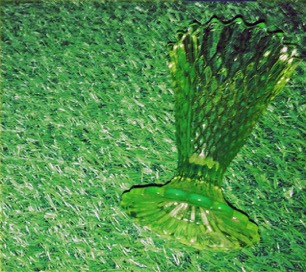 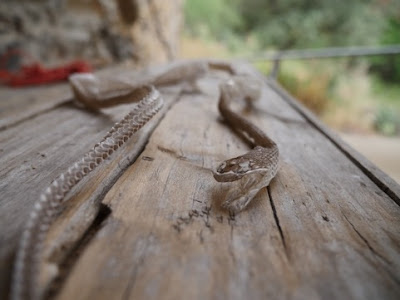 This snakeskin was given to me when I visited the Côa Valley in Portugal, which is linked to this creative project. The Côa Valley is the location of a large and ambitious ‘rewilding’ project.

The snakeskin was exhibited to represent the non-human dwellers
in these landscapes. The future of the Cornish clay-lands can include the re-establishment of a diverse rich abundant ecology, including reptiles and amphibians.

Can you imagine this landscape as a haven for such creatures?

Will climate-change make this harder or easier?

These items represent some aspects of the Côa Valley in Portugal.
The Portuguese writer, José Saramago wrote a book about a real
historic journey of an elephant who passed through the Côa Valley.
To celebrate this, he was invited to ‘bless’ the wine-harvest of 2002, in the village of Cidadelhe - where I will have an artist exhibition in 2019.

Elephants and wine are also part of the past, present and future of the Cornish Clay lands, in different ways - some quite speculative… 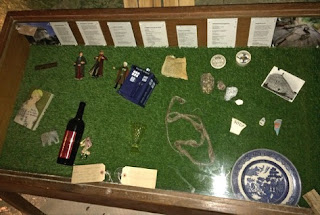 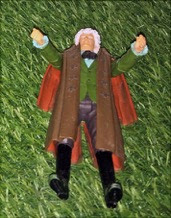 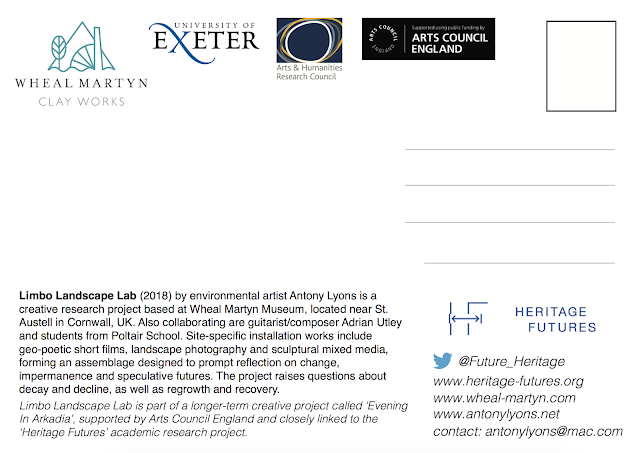