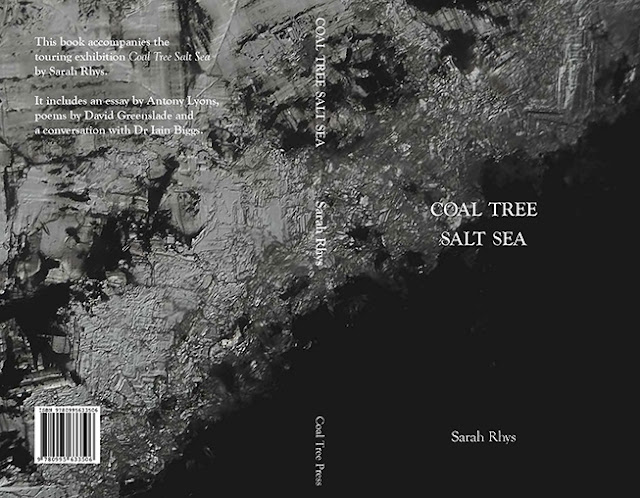 One message is from Vancouver; a weather report from a friend:
Weather wise, we got another huge snowfall on Saturday and another expected today or tomorrow. Vancouver has used 7000 tonnes of salt to melt ice so far, whereas most winters they only use 1000 tonnes. Salt shortage everywhere prompted Vancouver to hand out free salt on Wednesday but it was gone in minutes and people who had been lining up for it left disappointed.

The other message was from Sarah Rhys, a creator of wonderfulness (who I know from the days of Place Research at UWE - now Place Intl.). She sent me the cover image of her new book Coal Tree Salt Sea, which accompanies her new exhibition. In the book there is an essay of mine - harking back to salt mines and other explorations - past, present and future?
As it happens, I was very near Sarah's base a few days ago, on that special - some say magical - Welsh mountain, Skirrid

Here is some of my early draft text for the Coal Tree Salt Sea publication:

Some geopoetics of salt, people, places

There is a place I was once told about. It is called the sipapu - in the ‘Salt Canyon’, or the ’Hopi Salt Mines’. While spending time at the Colorado River in Arizona, I learnt of some old pathways; ancient route-ways to the Grand Canyon (Öngtupqa, in Hopi language). This is something I wrote at the time:
“…conversations with salt. The salt conversation was possibly the one that was most ungraspable. It certainly holds unrealised potential. The description of the Hopi ritual salt-route, from the mesas to the confluence of the Little Colorado and the Colorado River - as set out in Don Talayesva’s autobiography Sun Chief[1] - is engrossing and profound…”

Talayesva describes how the salt journey to the original sipapu (the opening leading to the underworld) included young male novices, formed the culmination of their Wuwutsim coming-of-age initiation process, “with elaborate ritual and ceremony”. An aspect which particularly interests me is the central role played by salt, simultaneously a poetic/sacred/symbolic material, yet also vital to the functional and survival needs of the tribe, or village. As described, the journey to Öngtupqa from the mesa-lands, and back home, took four days. To me, the activity resonates with the Australian aboriginal ‘songlines’ traditions - where the experience of the path is mediated by (and through) metaphorical and animistic relationships to locations, landforms and stories. For the Hopi, “The salt lies in dangerous territory”. It was a psychologically risk-filled expedition through a landscape of protective gods and spirits, during which the site-specific, imagination-based narratives are - or were - recounted and enacted by the older members of the traveling party - including a ritualized ‘coupling’ with the Salt Woman at a shrine along the way.

It seems these practices have now waned, as is common amongst tribal peoples worldwide, in this age of globalised, ‘westernised’, anti-ritual, culture. There are deep issues here of relationship to land & place, respect, and transformative ritual. In 2008, Wendy Himelick wrote of the Hopi tradition:
“On the one hand, they pray for life, health, and happiness for everybody – including non-Hopis. But on the other hand, there are certain restrictions upon which they all agree: no visiting Sipapu or the Hopi Salt Mines. It’s good for the tourists, or any bahana, to learn about the importance and sacredness of these areas, but not good for them to go see it themselves? Why?
It was explained to me to be a matter of preparation and of danger. Ongtupqa, no question about it, is considered to be a very dangerous place to Hopis. Not just anybody is allowed to visit, and those who are must undergo special processes of purification and preparation before entering and after leaving. It is understood by all that there could be very serious consequences to you and your family if these conditions are not met. What’s more, it doesn’t seem to matter if you believe or not – you’ll become a believer when the ill effects of disrespect hit you. It is a form of protection to keep the general public away from such sensitive areas." Ongtupqa - Salt Canyon,Wendy Himelick, 2008, Boatman’s Quarterly Review Vol 21 #3

For many people today, such words and sentiments probably don’t really compute?, and may actually be blithely dismissed. I am reminded of recent encounters in Hawai’i, where currently there exists a stand-off between the resident, scientific community of astronomers and many indigenous Hawaiians (kānakaʻōiwi). The former are arguing that it is essential - for science, and for the local economy - to construct an ‘extremely large’ new generation telescope on Mauna Kea - the tallest mountain in the world (if measured from undersea base to summit). The latter believe the mountain to be a sacred space, deserving of respect and sensitivity. (Mauna a Wākea is the first-born mountain son of Wākea and Papa, the progenitors of the polynesian Hawaiian people). This theme - of such oppositions - seems now to be a significant challenge for humanity as a whole - how to balance, or maybe braid, very different paradigms? Despite what is often presented, there is no simple divide between ‘western’ and ‘indigenous’ perspectives or situations; the space between is blurry and complex. Many places, and peoples, in the ‘westernised’ world still hold presences of sacred, pre-religion, relationships to places, artefacts, materials - including salt.

Bread and salt, salt of the earth. Like water, salt is generally viewed today as purely utilitarian. It is for sustenance; it is a chemical, extensively used - for instance - for de-icing our road networks to allow unimpeded winter vehicle movement. Clearly, it wasn’t always so, and there are remnant traces of ‘the other’ (the poetic) in some ‘superstitions’ around say the spilling a salt cellar (whereby one tosses a pinch of the spilt salt over the left shoulder). Irish folk remedies include the use of salt, combined with a recitation of prayers, to cure those who might have been ‘fairy-struck’; and tainted ground or spaces may be purified by sprinkling salt. In Wales, the tradition of the ‘sin-eaters’ also embraced the transformative purification power of salt.


In 2012, I took a group of young art students to visit some salt ‘hills’. These were in fact two large mounds of de-icing salt stored in huge hanger-like buildings by Cornwall County Council. My intention for that visit was to shift the mode of perception of the material - salt - from an intimate (studio/desk) scale to a much more expansive, landscape-scale imagination. Accompanying the impressive presence of these two salt mounds was the story of their very different origins and journeys. As we learned of, and pondered on, the geographical sources, our minds conjured up distant salt lands and spaces. The mound of large and irregular crystals of pink and white had come from a solar salt pan in an Egyptian desert; the more uniform brown-tinged hill held a history much deeper in time, and in the ground. It was ‘rock-salt’ from Kilroot, near Carrickfergus in Ireland. In the 1850s, a surveyor searching for precious metals discovered a thick layer of salt under about 600ft of rock. This is the same Triassic salt layer that also appears, and is mined, in Cheshire, in England - laid down when this part of the planet’s surface occupied much hotter, desert climatic conditions.

I recall the first time I heard about a meshing of people, salt, landscape and time. It was the description by friends from southern Brittany of the lives of the workers - all men, mostly old - who tend the coastal salt-making tidal pools. To me, it conjured up a picture of a semi-monastic existence - slow, quiet, repetitive labour; following and resonating with the tides and seasons, but unvarying across the years, or centuries. The salt from here is grey-green due to impurities of suspended clay; not ‘fine’ table salt for the former tables of the rich - but today it has a place in the new paradigm of artisanal produce, amongst those who are seeking enhanced connection to the origins of their food, and to slower, human-scale, more harmonious production methods. As yet I haven’t visited Le Marais Salant of Guerande, but as a student of landscape and visual artist, I have poured over aerial photos of this patchwork-quilted, honeycomb-patterned land with its appealing colour spectrum of subtle greys, greens and browns. From the air - and space - these coastal salt landscapes of the world, although visually unique, each possesses a recognisable common essence. A search of San Francisco Bay, the Portuguese, French and Spanish coasts, and many other coastlines, reveals similar patterns. Most of these coastal marsh areas are, of course, destined to be inundated, and erased, due to slowly rising global sea-levels. Perhaps my fascination with them lies in their sense of ephemerality and fragility, as much as with the ancient meditative human relationship.

As I write these words, I’m travelling - downstream - along the Douro River in Portugal. I’m sure this waterway would have enabled the sea-salt trade to extend its reach deep into the interior of Iberia, across the great Castilian meseta. Salt is also key to what is still one of the cornerstones of Portuguese cuisine - bacalhau, or dried salt-cod. The Grand Banks cod fishing grounds off distant Newfoundland were able to be exploited by Iberian fishermen, only with the input of vast quantities of salt, needed to preserve the catch for transport and long-term storage. This is a true ’slow food’, requiring days of soaking and changing of water, before it is suitable to be incorporated in one of the seemingly thousands of bacalhau recipes. In very rural spots, it is still possible to see the bacalhau soaking in a small stream of spring water. This reliance on salt for a major part of a culture’s cuisine was also a facet of ancient Greek and Roman life. The salty fish sauce the Romans called garum (for the Greeks before them, it was garos), and a paste called muria, were mainstays of their diet. The poor used the residue - allec - to flavour their corn porridge. It seems the garum of Lusitania (present-day Portugal) was especially prized in Rome.

For a final glimpse at salty geographies, I’ll return to America and the reality of the intimate braiding of people, place, function and myth that relationships to salt – both human and non-human - have created. It is believed that some of the present US road network is derived from pre-colonisation Native American trackways, which themselves were overprinted upon the seasonal migratory routes of the bison herds that the tribes hunted. One example is what is called The Buffalo Trace (also known as the Vincennes Trace or the Old Indian Road). The journeys to the Kentucky salt-licks from the prairies of Illinois provided an essential nutrient for those vast animal herds. We find here now a largely forgotten palimpsest in the landscape, and one that weaves together salt geology, mappings and the geopoetics of disappearance.

[1] Sun Chief: The Autobiography of a Hopi Indian (The Lamar Series in Western History) by Don C. Talayesva