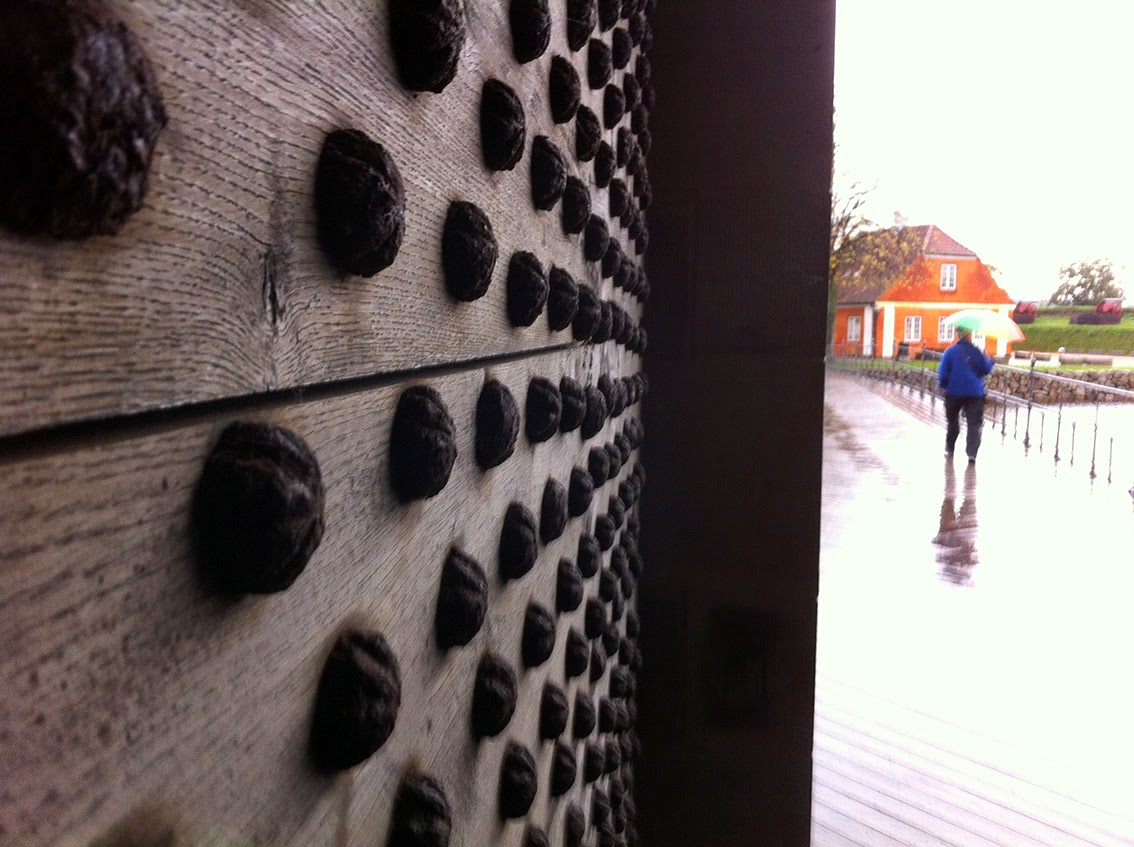 A long overdue addition to the blogosphere - so this one will be a time-spanning assemblage. Working back from the recent past:

I'm on a train travelling through the birch forests of Sweden. My thoughts are drawn to some filmic memories and resonances. Strongest is the echo of Elem Klimov's powerful and troubling Come and See, which does not have a Scandinavian setting - but the atmosphere of the landscape feel somehow similar. Another of Klimov's films is Farewell, set amongst a Soviet community whose island-homes and lands are soon to be submerged by a huge reservoir project. There is a powerful theme of (loss of) deep place-attachment running through the film - a work that is inhabited by the spectral trace a different loss - the death of Larisa Shepitko (Klimov's wife) who was part-way through making this film when she and her film-crew were killed in a car-crash. I'm hoping to show Farewell during a water/flood/drowned land project I'm carrying out in Somerset. This project is called 'A Long View', conducted with history professor Steve Poole, and part of the longer-term 'Drowned Lands' initiative. After a period of scoping field investigation, we've established a base for our operations at West Lyng Tithe Barn - close to the heart of the flood-threatened lands. Recently a contingent of Dutch water/land experts (engineers, scientists, planners etc) stopped off in Somerset during a 3-day flood-themed workshop-tour. Steve and I had previously introduced them to this impressive architectural structure, and part of their workshop was held there. It was also an opportunity for us to discuss some elements and approaches of 'A Long View' to both visitors and local people. Three workshops will take place at the tithe barn in Spring 2015 - on themes of 'past. 'present' and 'future'. This process will then culminate in the summer in an intermedia installation (maps, film, sound, sculpture) in this impressive space. 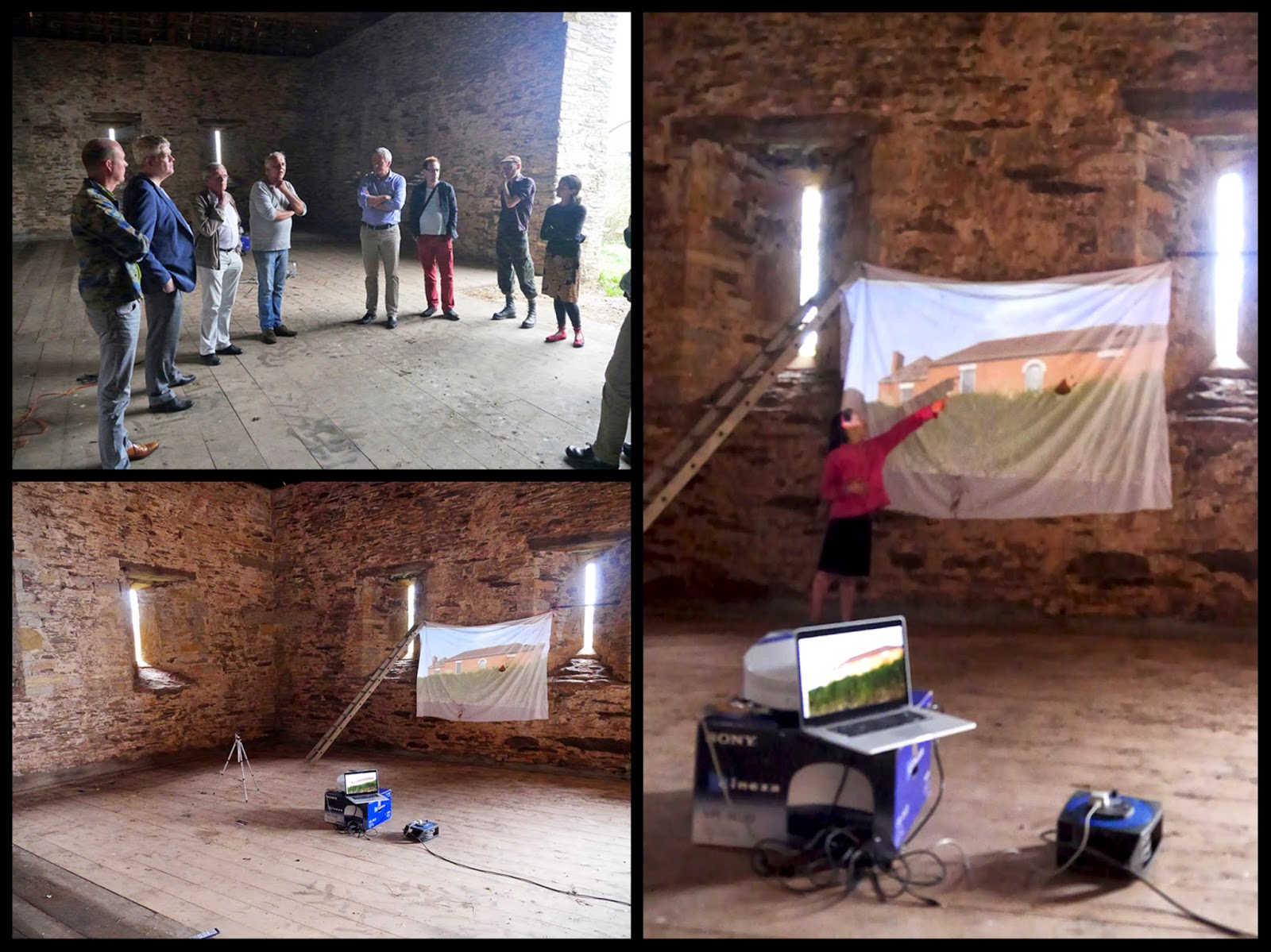 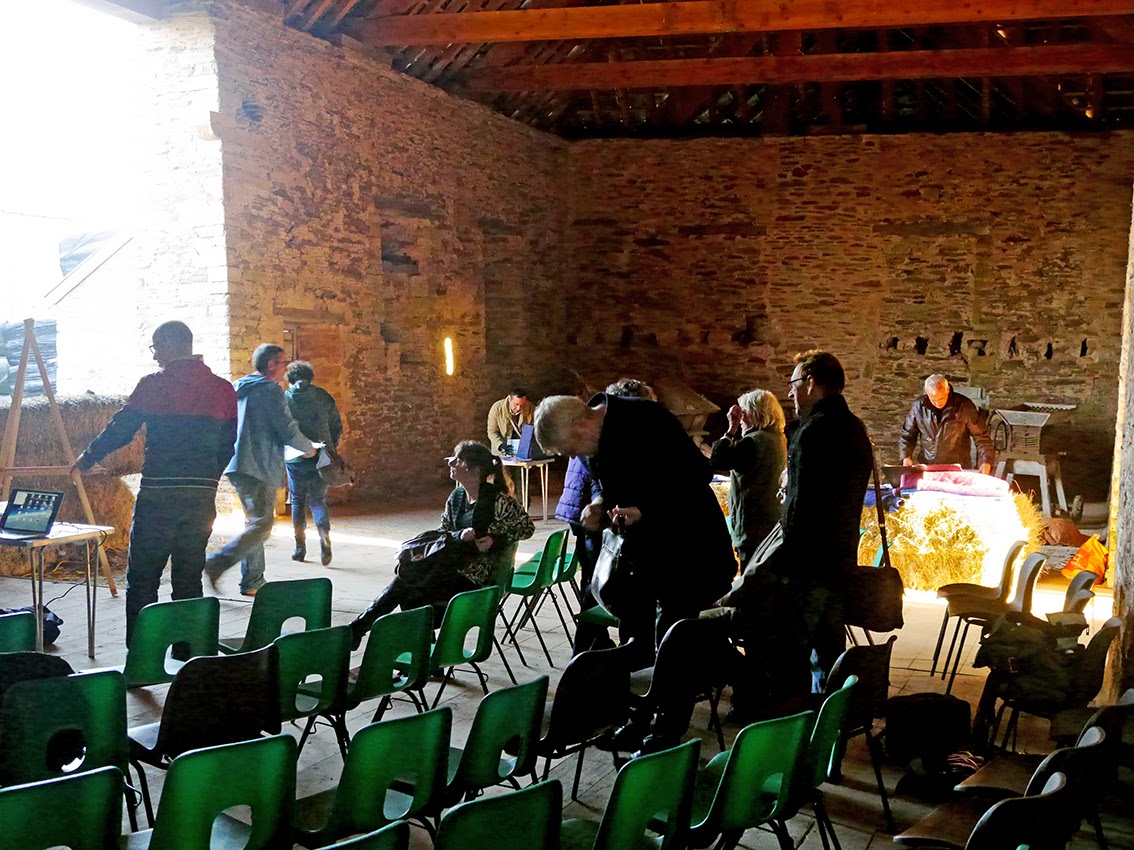 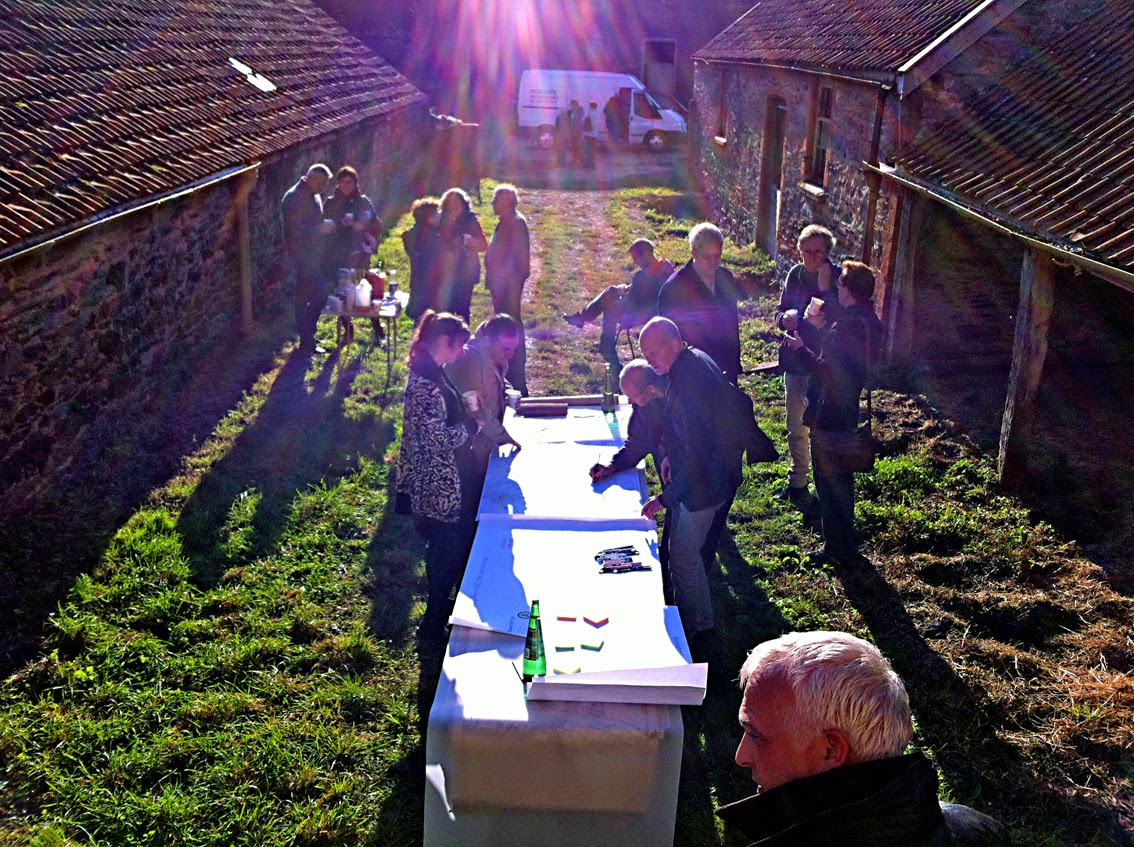 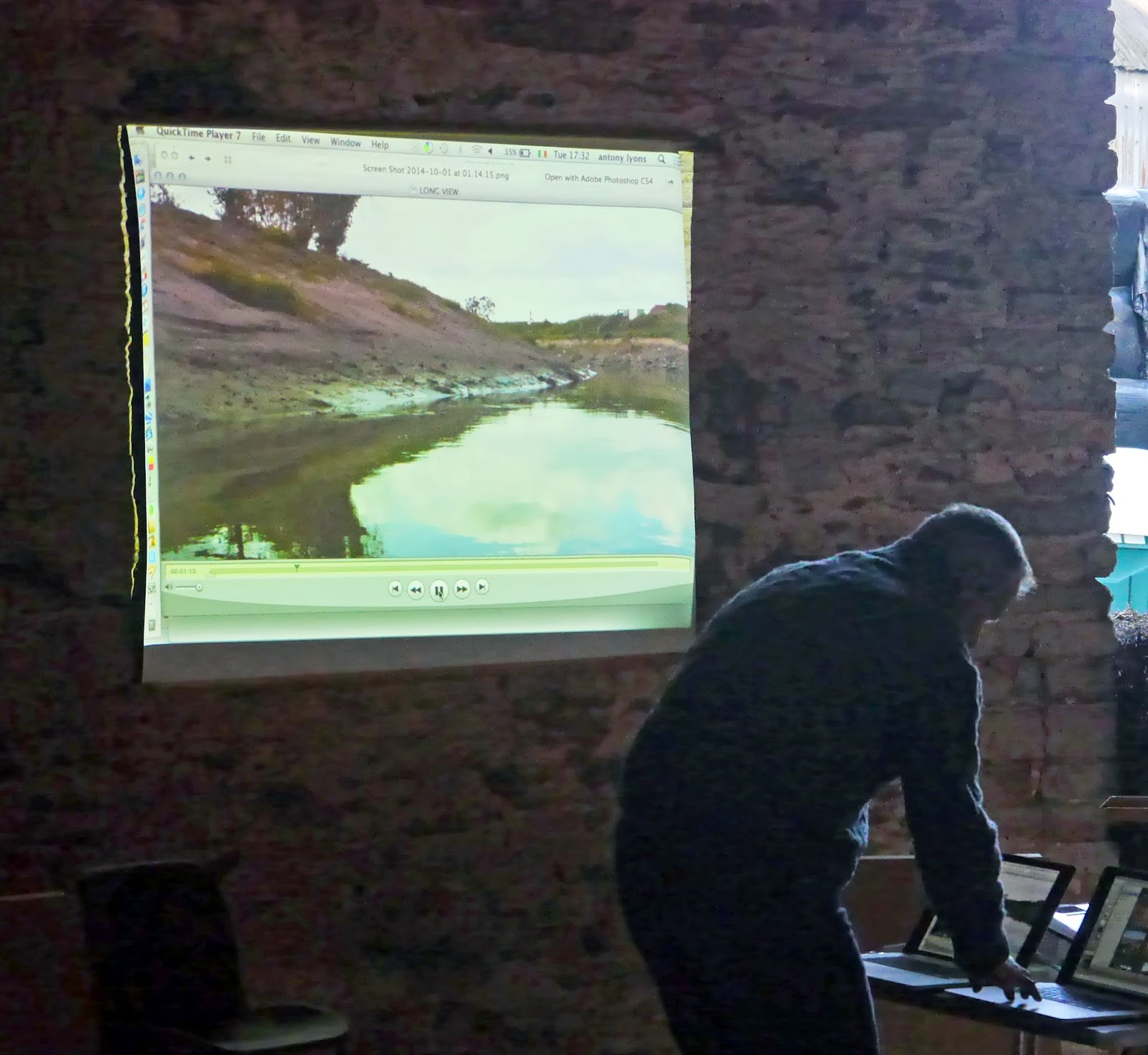 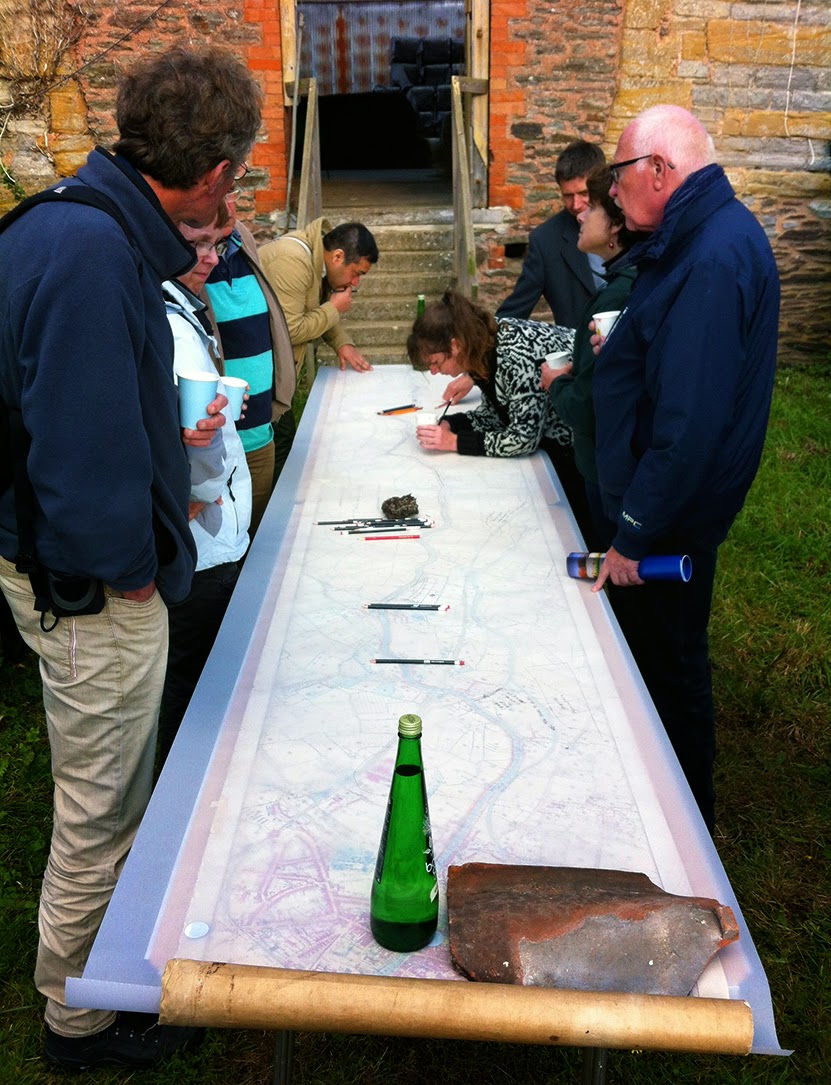 Some days before I and film-maker Nathan Hughes spent some time with the barn's owner Ann Lloyd-Jones, talking about the history of the farm, it's changes and challenges. We were shown around the dusty collection of farm artefacts, tools, carts, cider-press and much more. The farm is part of the original estate of Athelney Abbey, and so it is woven into the richly layered tapestry of history and legend of this part of the 'Vale of Avalon', especially connected with King Alfred. 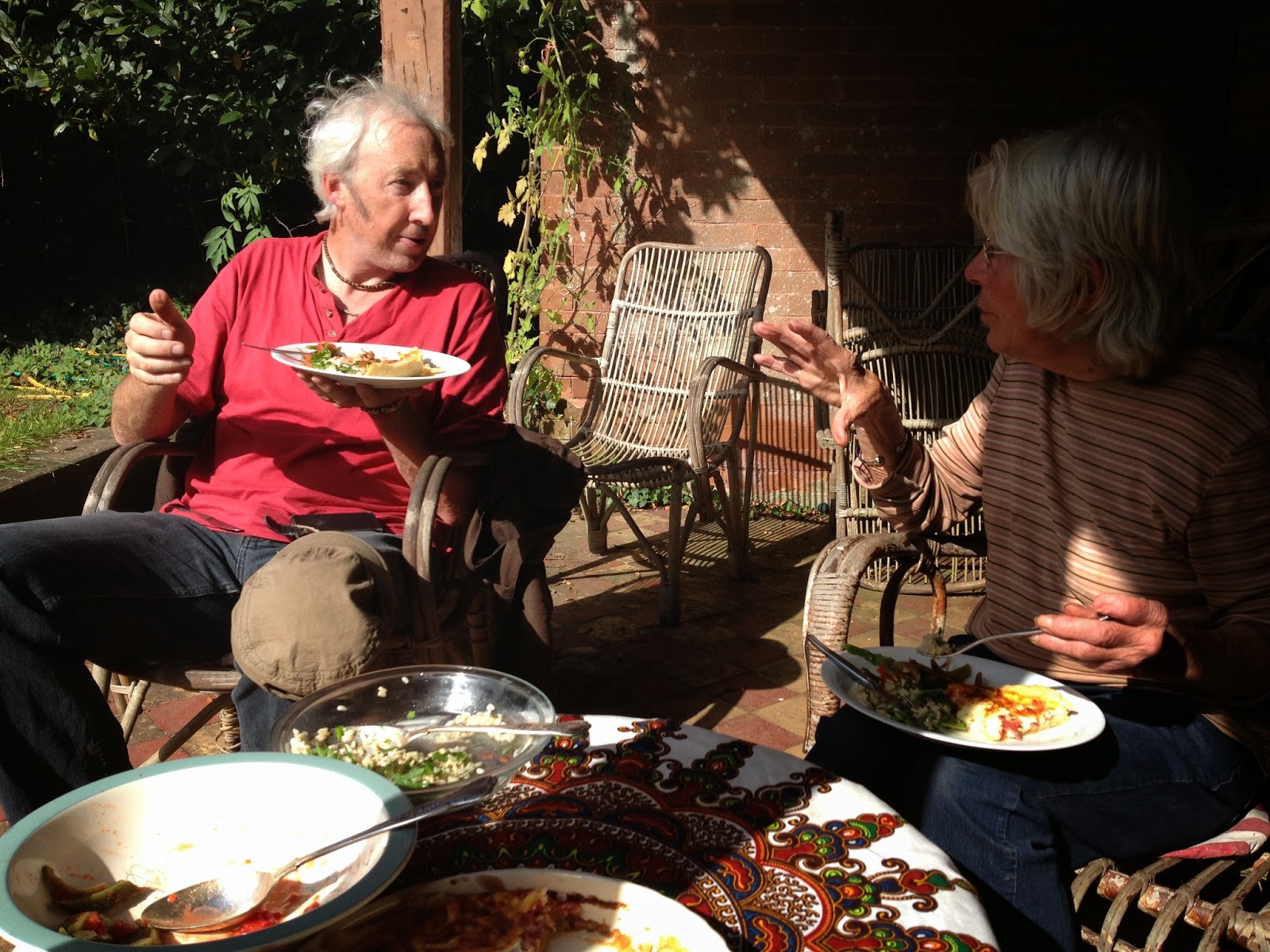 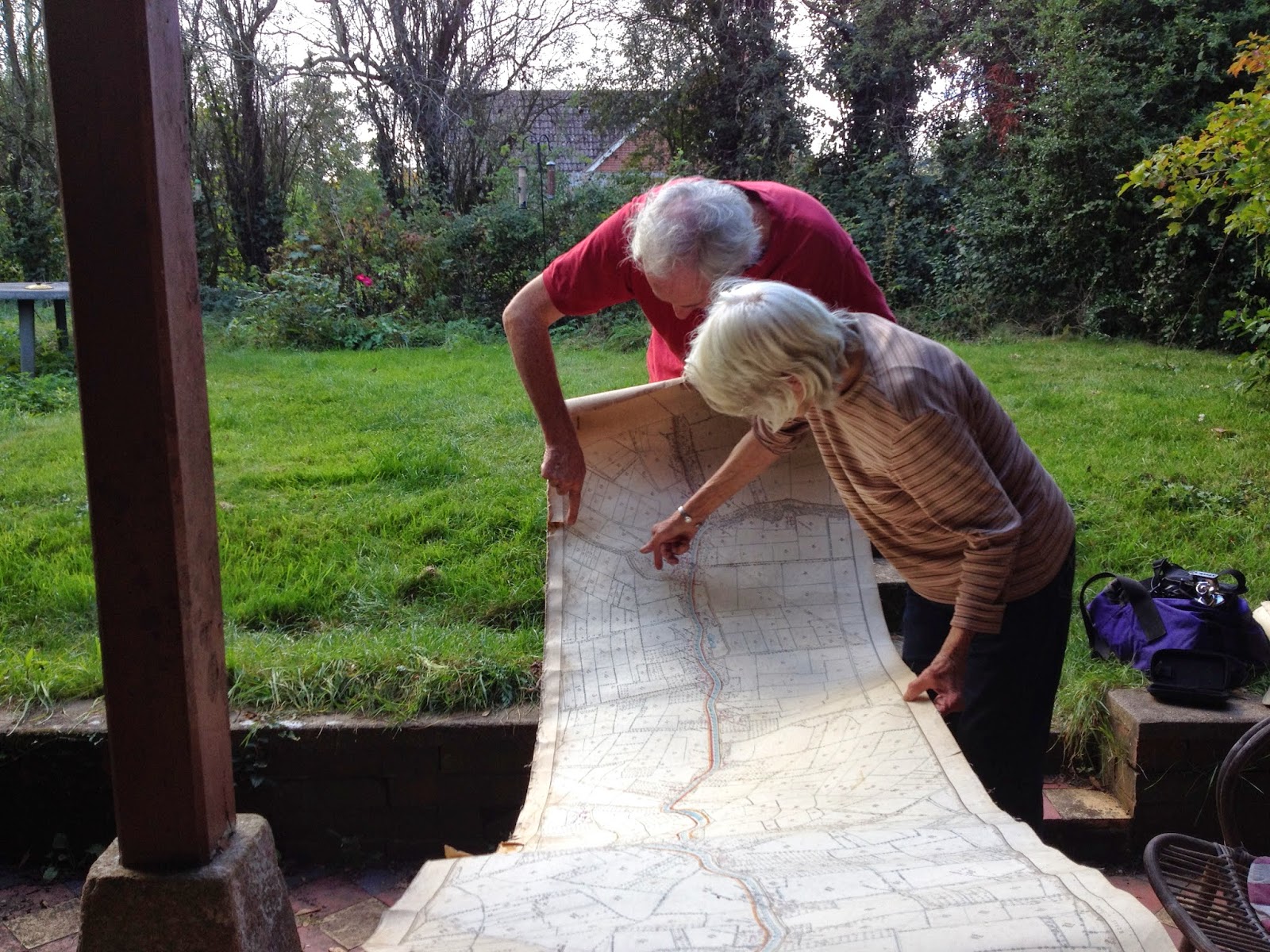 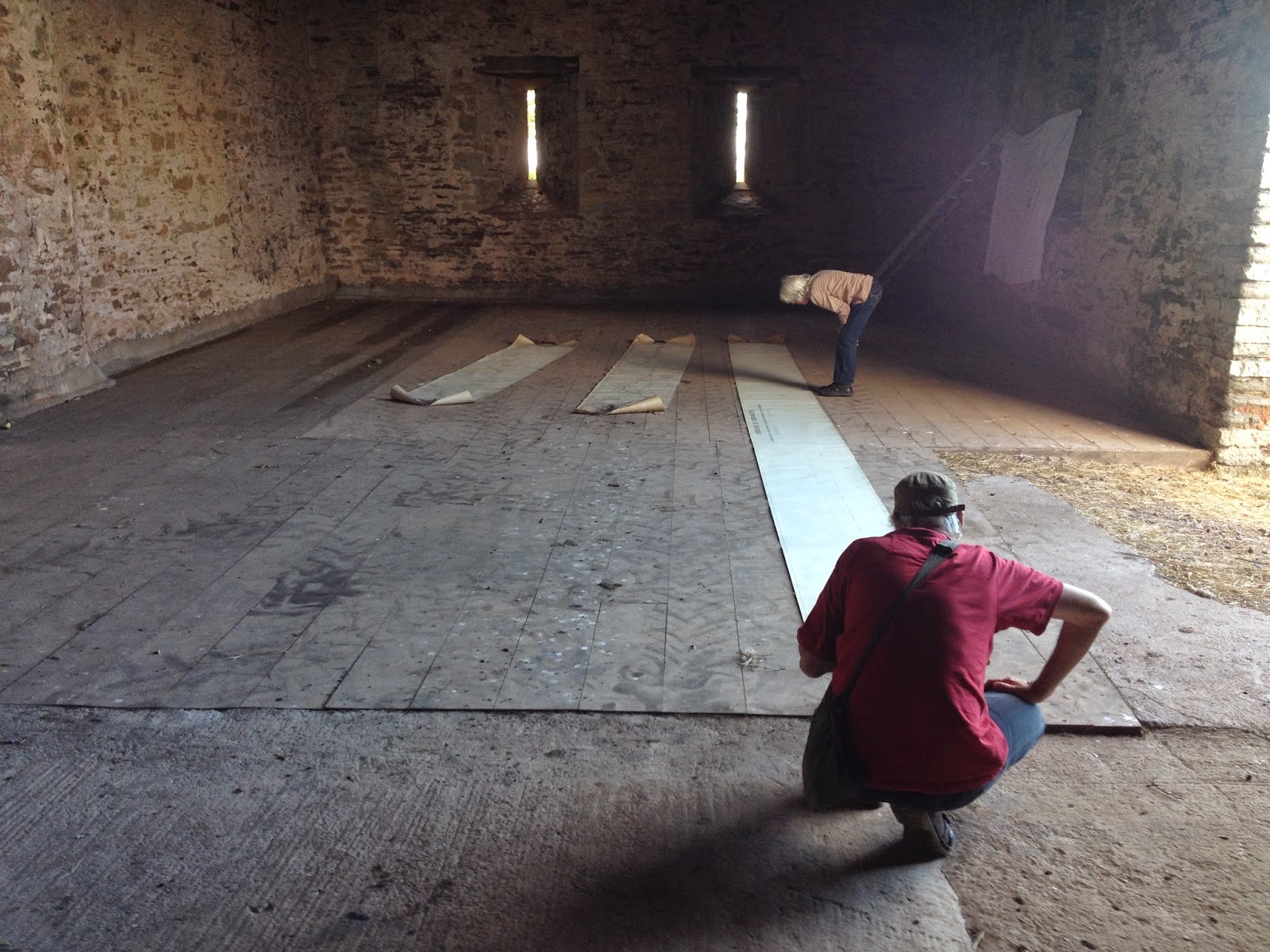 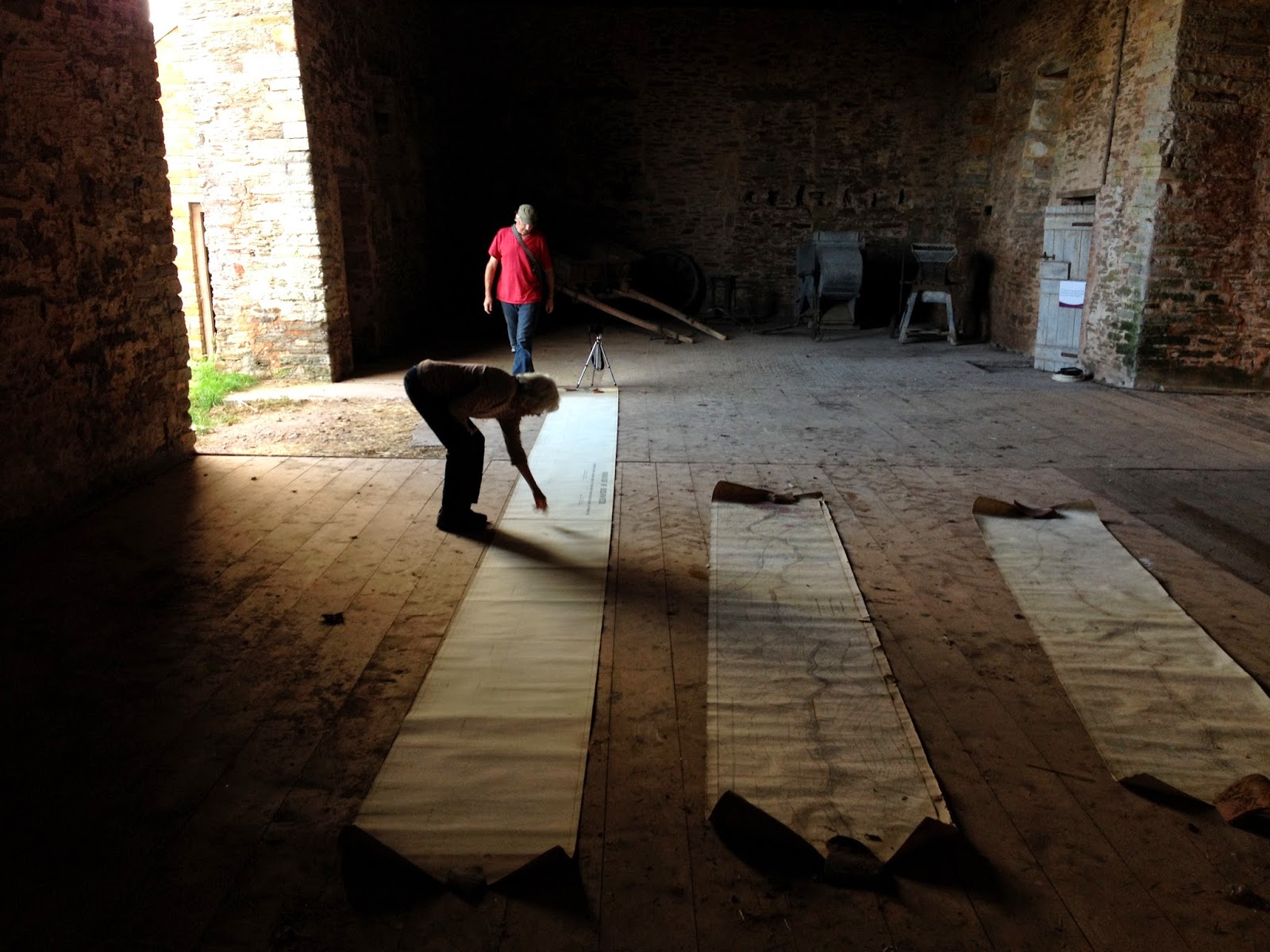 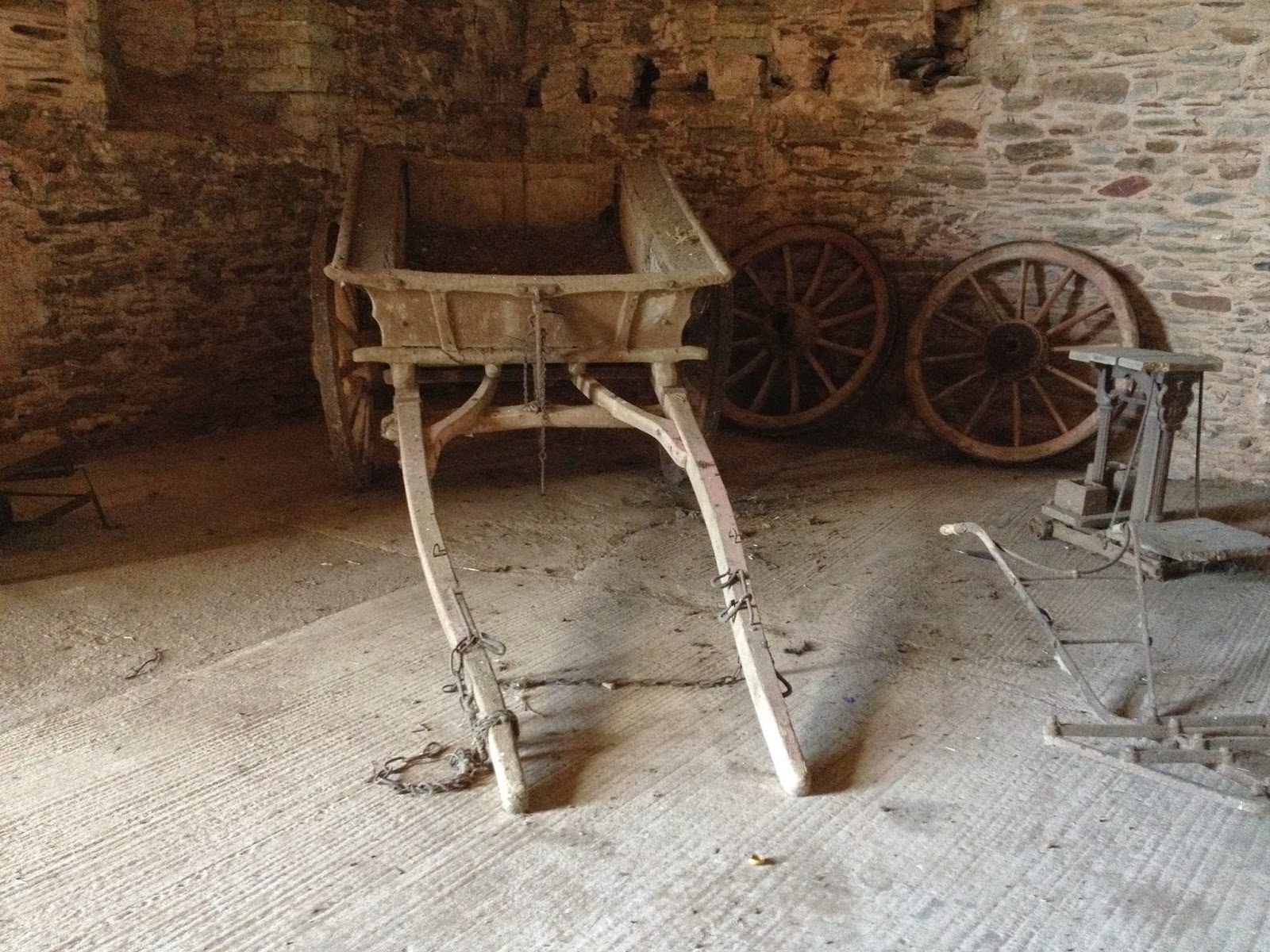 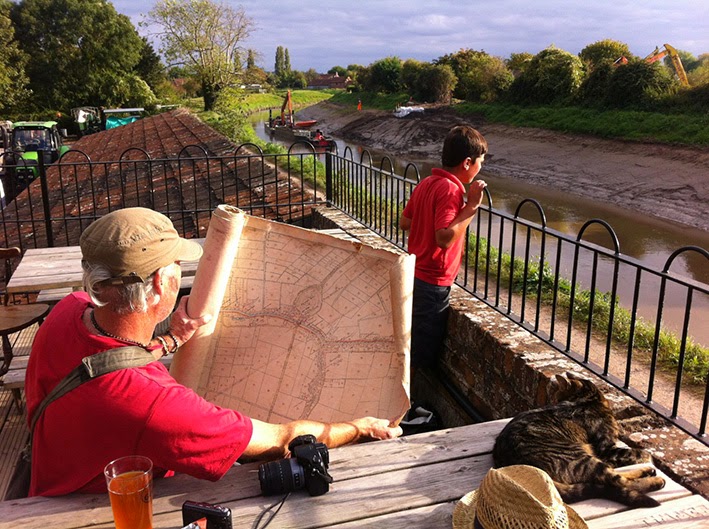 Atop Burrow Mump, on the day of the Dutch workshop, we were all treated to a very quirky performance of the Alfred story - from 'The Mummers' - a local performing arts troupe. Funny, irreverent and atmospheric, this was an exuberant, colourful continuation of a set of earlier more serene preludes - from the same performers - in the resonant cloisters of Wells Cathedral. 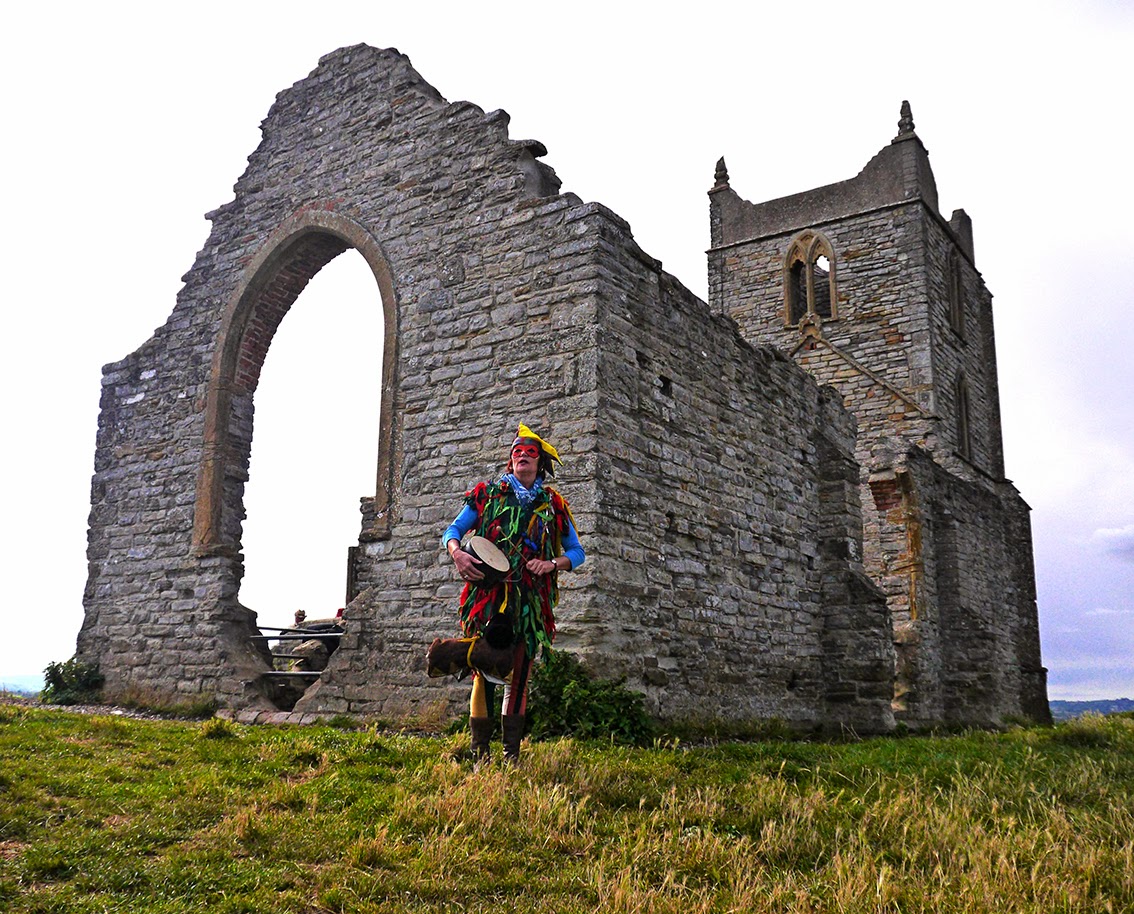 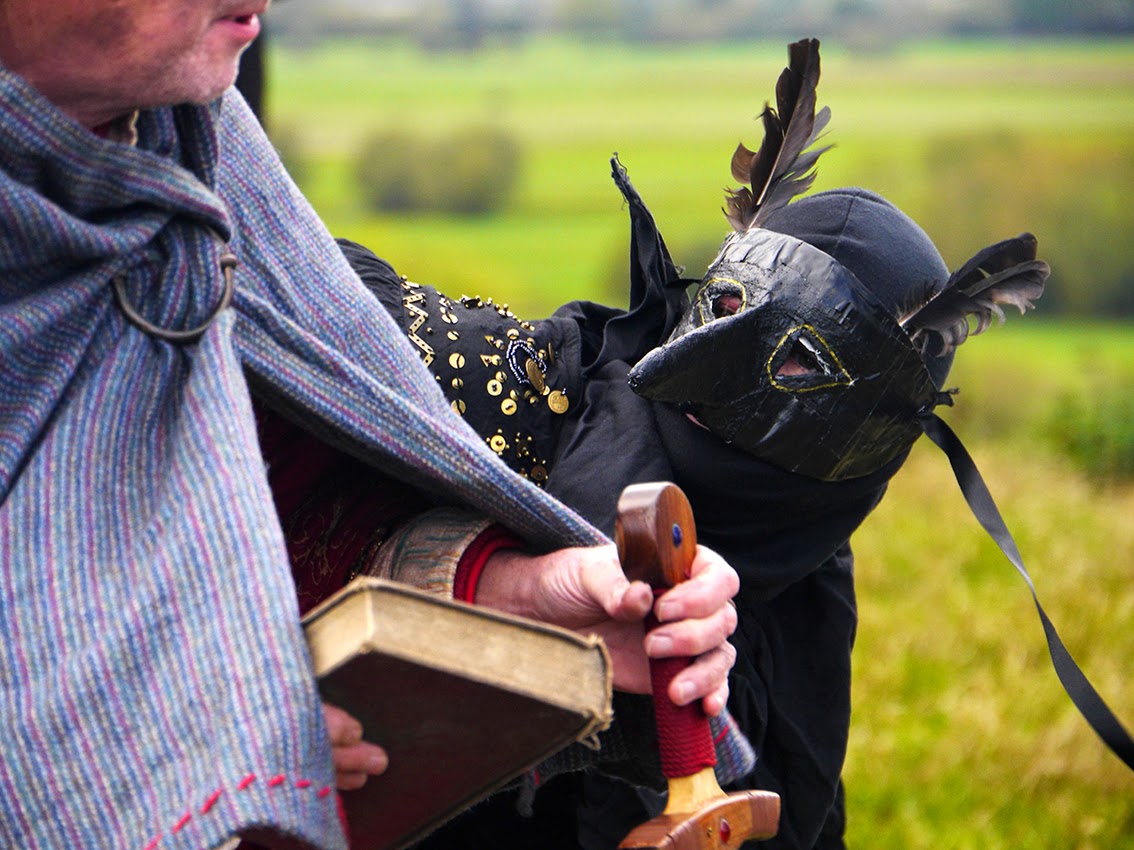 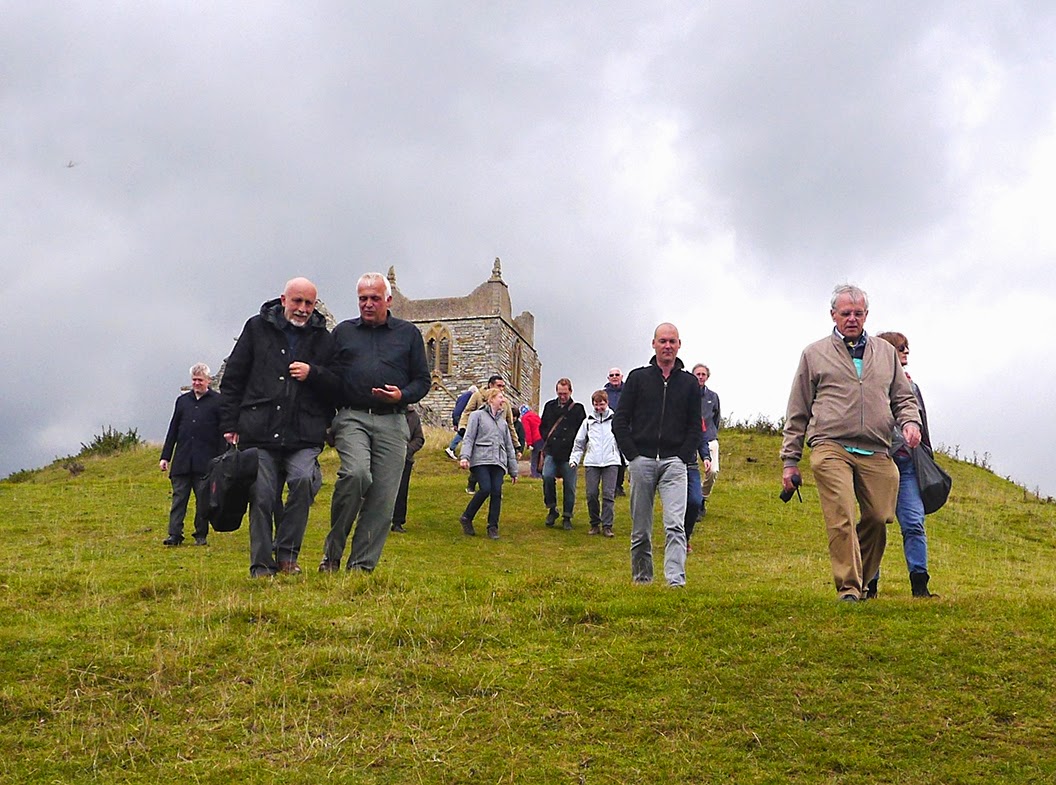 Working back in time, it is worth presenting here some insight into another water-related activity - this time at the historic Underfall Yard in Bristol. In the lead-up to a NOVA Fantasy-Lab project, film-maker Nathan Hughes and I spent a day exploring and creatively documenting the fantastic collection of wooden patterns that has accumulated over the 200 years of harbour operations in Bristol. I first encountered this assemblage of fascinating objects over 10 years ago, when carrying out an environmental audit of this site, so it was wonderful to finally get access to creatively interact with this uniquely atmospheric space and its special contents. This relief is greatly tempered however by the revelation that the whole store is in the process of being cleared away as part of a revamp of the wider site, funded by the Heritage Lottery. 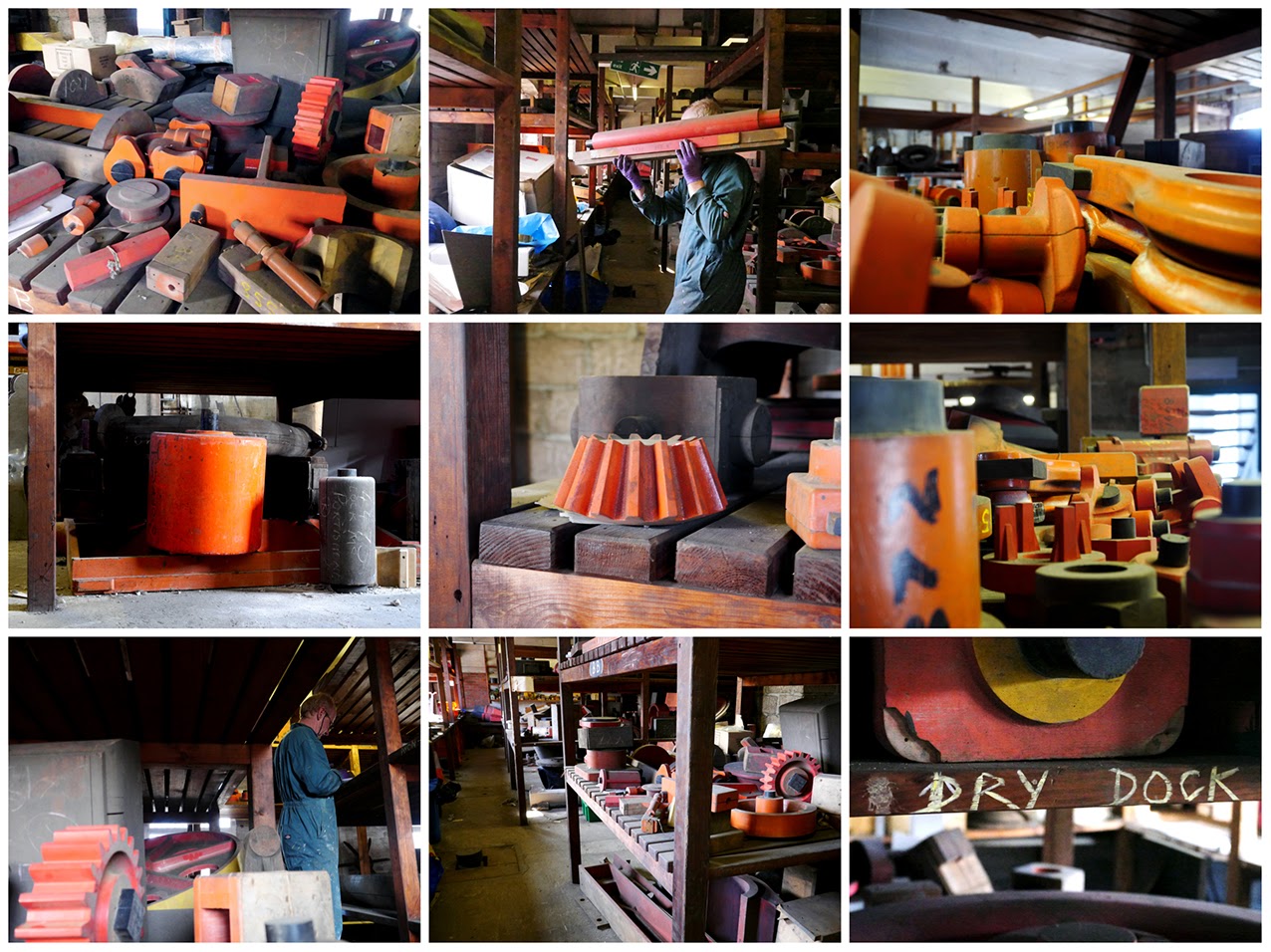 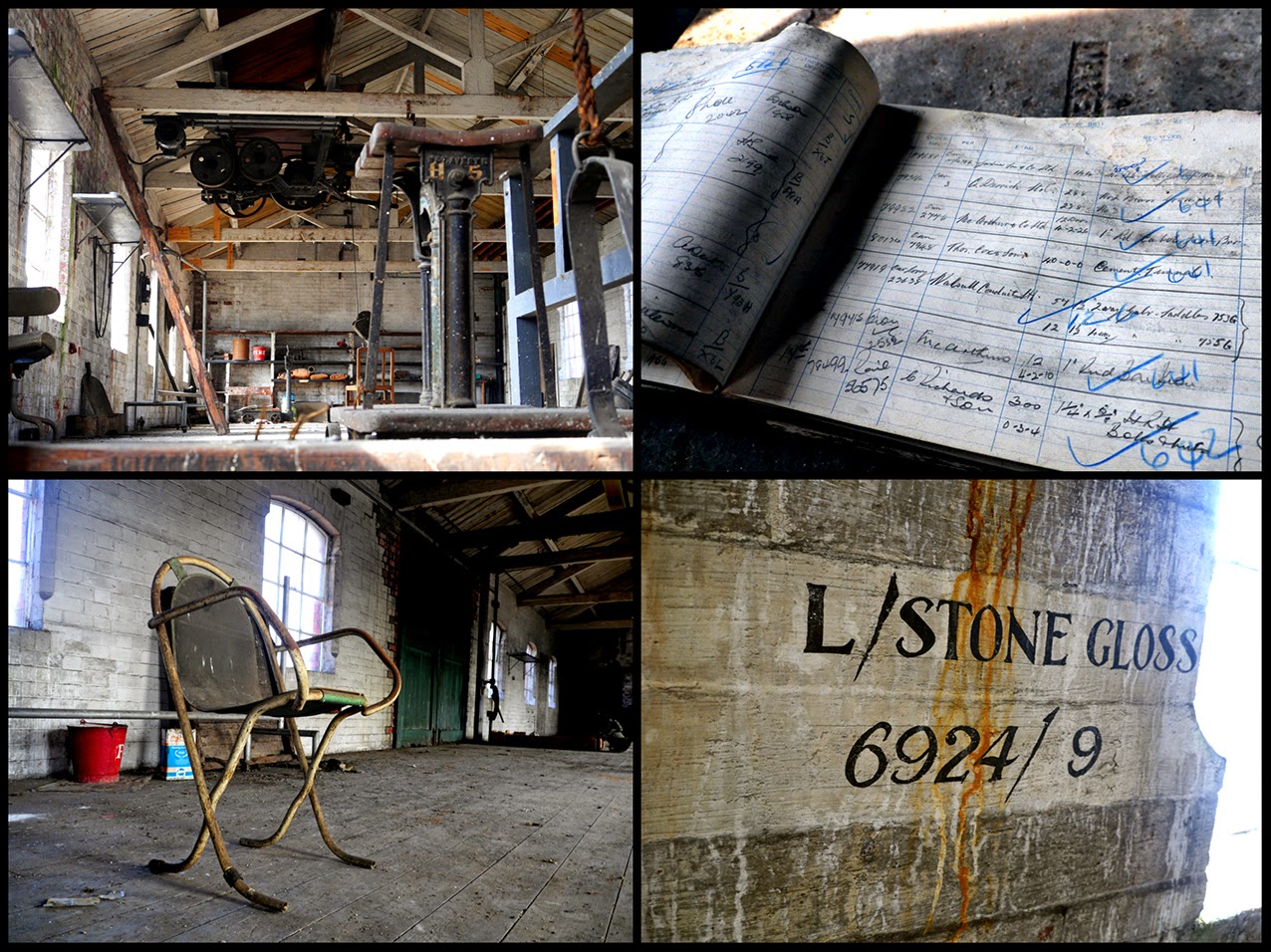 This raises questions for me - not just of the disappearance of a real-life, uncontrived assemblage of objects, which have at the same time a uniform cohesive aeththetic quality, with both allusion and association with the sensuous material culture of the working harbour. The fact that they are 'positive' forms (carved in wood) which were used to create 'negative' spaces (in casting sand), which were then used to cast the required 'positive' metal objects (from molten iron) imparts a material process-narrative that has its own particular poetry and nuance. The local distinctiveness of the situation is boosted by the naming of the storage shelves (according to which part of the historic harbour is the setting for the particular cog, wheel, bearing etc...) 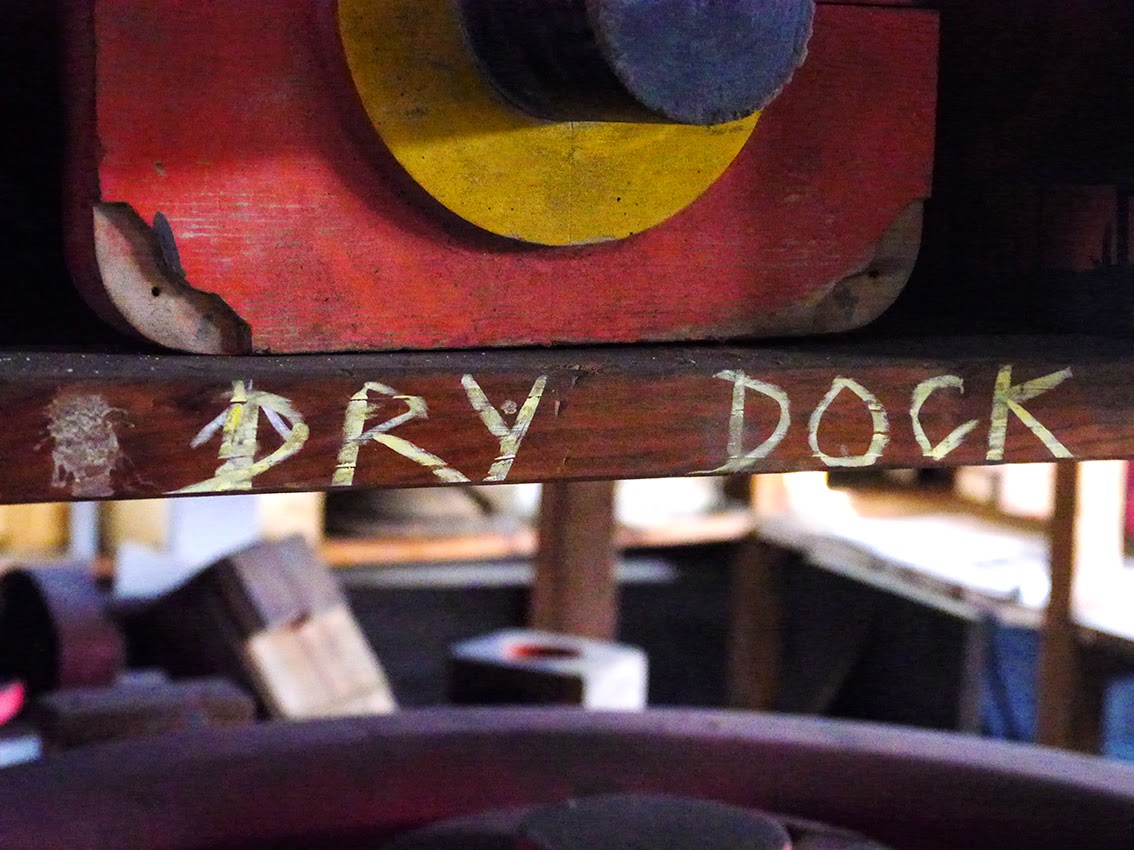