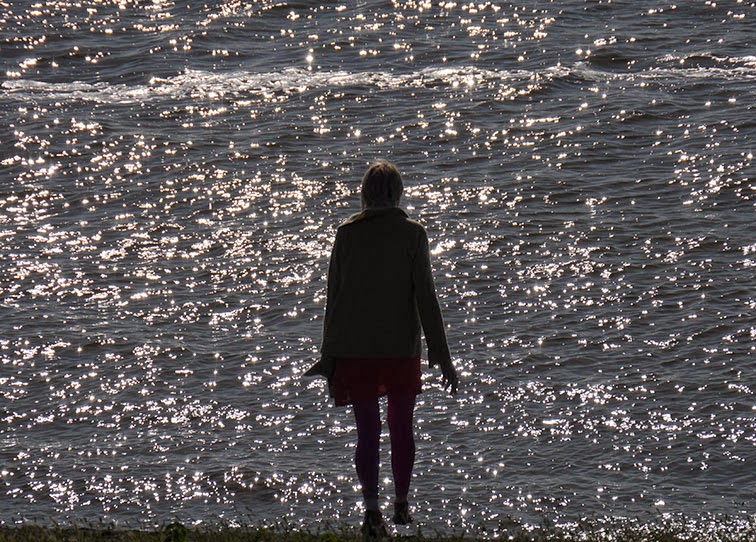 It is productive - even necessary perhaps? - to have a pressing deadline, pushing me to gather my thoughts on this process of water interactions and conversations. A reflection, looking-back - to compliment a looking-ahead penned earlier this year:

Recently, I was invited to a viewing of a documentary film about the artist Anselm Kiefer, Over Your Cities Grass Will Grow, which contains some of his musings on water and life, including a kind of yearning for our origins in the salt-laden seas (Kiefer comments on the similarity between the composition of our blood and that of sea-water).
In a way, this echoes some narration text I wrote for a recently presented short film, alluding to the  theories of connectedness between human brain evolution and shoreline dwelling/food supply (e.g. the 'Littoral Theory'); the undeniable therapeutic influences of water and the sea; and also of some interest to this theme, there is an Aquatic Ape Hypothesis.

Below, I offer some images from a recent trip (back) to Lough Gur in Ireland (Co. Limerick) - a watery place with which I've been closely connected since my early childhood. On this occasion I also sought out the nearby St. Munchin's 'holy well'; not a difficult quest, but one I've intended to undertake for many years, since stumbling across an old metal road-sign (directing one to this well) in a reclamation yard in Bristol, my adopted home. The enduring reverence for this place - as evidenced by its upkeep and votive offerings - is a remnant strand of deeper pre-Christian water enmeshment. This is still much in evidence closer to home - at Avebury/ River Kennet for example. Earlier this year, I also found such echoes in the mountains in Portugal - where I witnessed a lingering tradition of sacred respect for springs, pools and fonts. 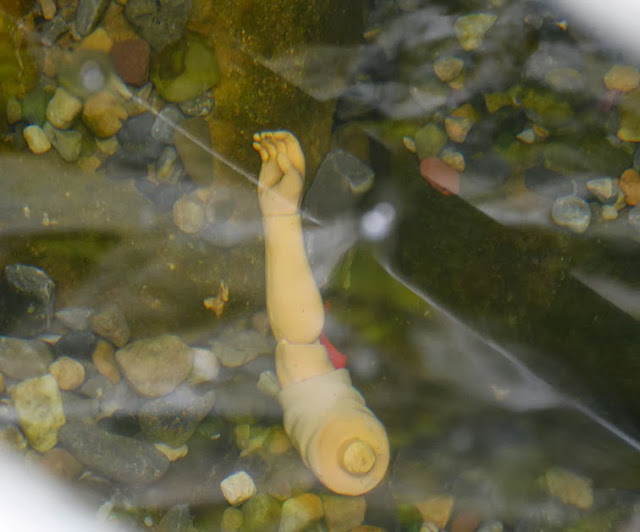 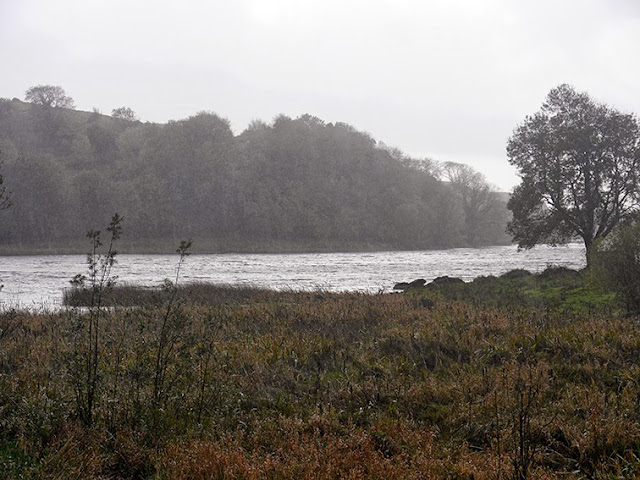 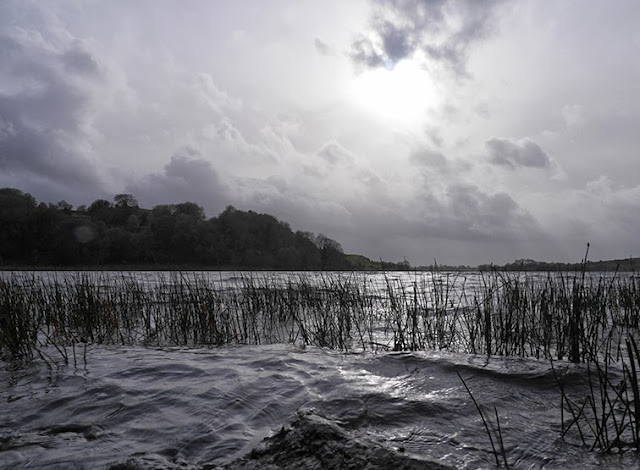 But how does this relate to our 'more than human' investigations in, and around, the River Torridge in the North Devon Biosphere Reserve? Or to 'participative action research' with water?

From the standpoint of both temporal and spatial distance, one of my most abiding memories from the research workshop outings is the elusiveness of the river (Torridge) at its headwaters, at the 'source'; and our struggles over the boggy culm grassland, with its sponge-like quality. To a large extent, this was in the plan, and therefore not expected to be straightforward (and water never is?). Yet the immediacy of the encounter - on the ground - was richer and more resonant than I predicted. In a limited way, we (through our squelching footsteps, like the grazing cattle) were interacting with, and adjusting, the locality’s water processes and patterns. I am left with a sense of water being all-pervasive in the pores, the microscopic rivulets of the land, and present too as much deeper, warmer hydrothermal flows - again echoing water in living organisms, in humans and the veins of non-humans. (In passing, I am reminded of those moon rocks I studied as a geology student, which don't possess the myriad of tiny hydro-thermal veins that are common in earth rocks). This time of year, in North West Europe, water gets everywhere; rising damp; seeping through stone and brick walls; condensation; lingering as mist outside. The ubiquity of this material is like no other. Water is sponge-like in other ways too, with its ability to dissolve/absorb a multitude of materials (salts, metals, organic compounds), but still appear unchanged. 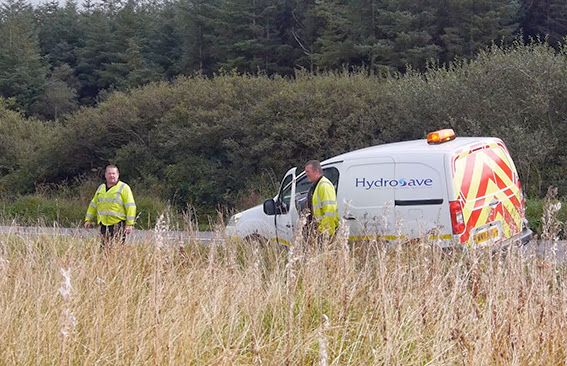 During our awkward, ungainly progress over the culm bogland, we encountered two seekers from the local Water Company, on a quest for an underground leak from a water main. A serendipitous meeting and most appropriate. Two water 'dreamings' or songlines intersecting - in time and in space. There is a need, I feel, to range laterally in our investigations of water relationships; to look once more at the variety and nuances of indigenous/older/deeper perspectives and paradigms of connectivity to the world. A re-sensitisation? And a geopoetic sensibility? Since our October field excursion, I have uncovered a book by Jacquetta Hawkes; her tour-de-force, A Land (1951). Here is a quote from the introduction:

"In this book I have used the findings of the two sciences of geology and archaeology for purposes altogether unscientific. I have tried to use them evocatively, and the image I have sought to evoke is of an entity, the land of Britain, in which past and present, nature, man and art appear all in one piece. I see modern man enjoying a unity with trilobites of a nature more deeply significant than anything at present understood in the processes of biological evolution. I see a land as much affected by the creations of its poets and painters as by changes of climate and vegetation.
The nature of this unity cannot be stated, for it remains always just beyond the threshold of intellectual comprehension. It can only be shown as a blurred reflection through hints coming from many directions but always falling short of their objective"

What is wonderful about her writing is an embracing of a multi-facetted, multi-layered mycelial integration. A fluidity of space and - especially - time. Mutability. Complexity. Change. Extrapolating this to our current watery concerns, for me it suggests that water will not be constrained, defined, framed. Our interests, relationships and perspectives - whether sacred, philosophical or scientific - are just some small facets of the whole picture. The manifold manifestations of water are largely inaccessible, unapproachable. On the one hand, we have - as Ivan Illich pointed out - H2O (the waters of utility and industry - "a cleaning fluid" - and privately owned at that) and on the other hand there are "the waters of forgetfulness" (the mythic, symbolic, magical, unconscious). In the realms of water, we have the familiar - oftentimes romantic - 'water bodies' (rivers, lakes etc) - relatively easy to sacralise; but water manifests as plutonic hydrothermal flows, abyssal vents, stratospheric clouds, industrial/sewage effluents - less easy for us to identify, or converse, with? (but all as real as the river…)

Different co-minglings: In the closing discussion of the research workshop, one of the emerging  ideas (or suggested thought experiments) was the prospect of speaking as…a river, a water molecule, a cloud. The meaning of this differs significantly from speaking with (in conversation) or speaking for (a spokesperson). All three are imaginative, poetic leaps, (and all necessary expansions into the vitality of matter?) but speaking as involves an inhabiting of watery-ness. Perhaps this leans towards shamanic? geopoetic? Perhaps it is not about porosity to the otherness of water(s), but a oneness with water(s)? A breaking down, or dissolution, of an insider/outsider duality? (River Flows In You?)

There is mystery and unknowability with water, as with any other non-human or human entity. One approach which currently interests me involves the practical insights that can emerge from changing time-frames (speeded-up or slo-mo film or sound). Our perceptions and sensibilities are locked into our time-relationship to the world; we are trapped by our senses and cognition. Other living/dynamic systems reveal extraordinary, marvellous, uncanny attributes when perceived in shifted time-frames. From macro to micro, other truths, cycles, rhythms, pulses emerge; vastly more powerful and enduring than our narrow and ultimately futile efforts of control.