My presentation (of a project proposal) at the recent interdisciplinary Emotional Geographies conference in the Netherlands was titled:

The 'estuary' in this case is the Severn (aka Sabrina, or Hafren). The inclusion of 'almanac' - a word derived from Arabic/Greek sources meaning 'of the moon, or month' helps express the dominant lunar-tidal process in this water-body, with the second-largest tidal-range in the world. The map below shows the main settlements adjoining the estuary... 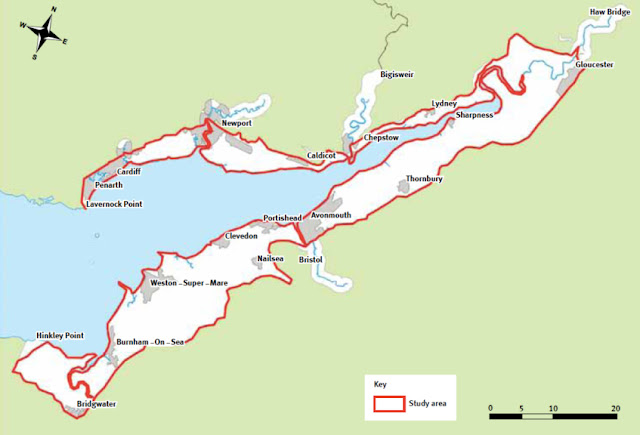 One of the main motivations to undertake creative investigations here is my perception of a widespread disconnection and disinterest in the (most recent) proposals to build a barrage/dam across this estuary. Most people's only encounter with this dynamic environment is now from the elevated vantage point of a vehicle on one of the two huge motorway bridges that cross the water.

It was not always so. Up until the mid-1960's, the main mode of estuary crossing was via small ferries. There was risk, excitement of all the senses, and intimacy with the material reality of the place. There was contact also with the working communities of the estuary - elver fishermen, ferrymen, sailors etc.

The danger was noted by Daniel Defoe in the early 1700's:
"There is also a little farther, an ugly, dangerous, and very inconvenient ferry over the Severn, to the mouth of Wye; namely, at Aust; the badness of the weather, and the sorry boats, at which, deterr'd us from crossing there...When we came to Aust, the hither side of the Passage, the sea was so broad, the fame of the Bore of the tide so formidable, the wind also made the water so rough, and which was worse, the boats to carry over both man and horse appear'd (as I have said above) so very mean, that in short none of us car'd to venture: So we came back, and resolv'd to keep on the road to Gloucester."


On the subject of fishermen - and in the context of  the threatened barrage:

"The Angler’s Trust estimate that 25% of all salmonid spawning habitat in England and Wales lies upstream of the proposed barrage, but the estuary is also a migratory route for sea trout, sea lamprey, river lamprey, allis shad, twaite shad and eel."

In an attempt to provide a platform for more diverse speculative questions, involvements and perspectives; and to activate and nurture new transdisciplinary responses to this place, I aim to apply a geopoetic approach in this setting; a weaving of the rational and the imagination. 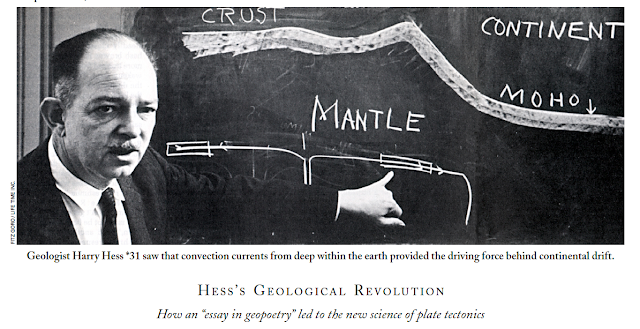 "The term geopoetry was first coined by geologist Harry Hess in the 1960s to introduce his readership to the novel idea of plate tectonics. He described his speculations as geopoetry in order to induce his readers (mostly other geologists) to suspend their disbelief long enough for his observations about seafloor spreading, driven by magma rising continuously from the mantle, to catch on. He needed his audience, in the absence of much hard data, to speculate imaginatively, as if reading poetry....a mental space where conjecture and imaginative play are needful and legitimate”
Don McKay, The Shell of the Tortoise, 2013

In a place, it is integrating and mapping: the rational, the romantic, the ecological, the traditional, the contrary, the absurd and the fantastical. Seeking a means to anchor - or frame - these deliberations, I have chosen three 'iconic' photographs, each of which records a pilgrimage of sorts; and each presents a tidal situation - though only one derives from the Severn Estuary.
The Aust Ferry (May, 1966).  This (above) is probably the most famous photograph from the Severn Estuary and represents a rupture of sorts - the end of ‘mass intimacy' with this part of the tidally-affected coast. The first Severn Bridge opened soon after this shot (in Sept. 1966), making it possible to take that passage between England and Wales cocooned within a vehicle. Apart from when this bridge is temporarily closed by high winds, any sense of the visceral unpredictability of this coast is lost, as are the heightened polarised emotions of attraction/reliance versus danger/fear.
The last ferry crossing occurred on 8 September 1966, the day before the Severn Bridge opened. This location is now a place of music-related pilgrimage. 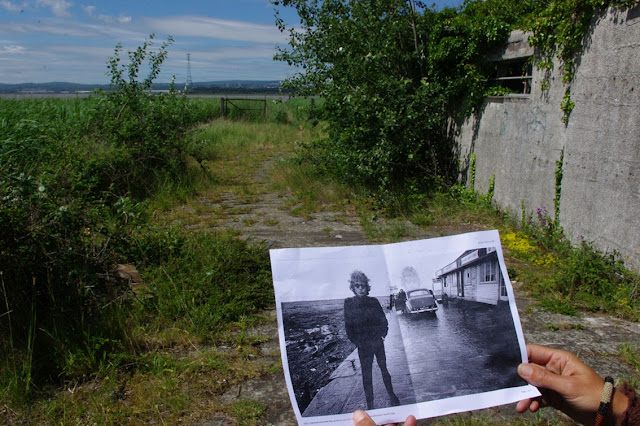 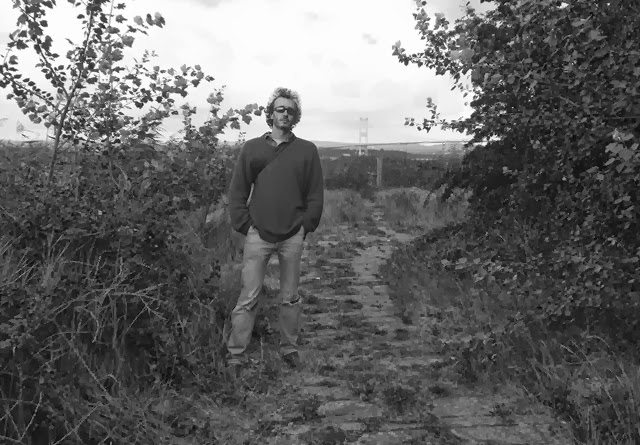 My second geopoetic 'anchor' image records Ghandi’s ‘Salt March’ arriving at the coast at Dandi, 1930. The main point of his 240 mile long march to the sea was political and subversive - a challenge to Britain's Salt Acts which prohibited Indians from collecting or selling salt. The action formed a pillar of Ghandi’s satyagraha, or mass civil disobedience. It documents transgressive activity, and therefore is of interest in relation to a current film project, and in relation to contemporary 'commons' movements that seek to reclaim rights and co-create sustainable relationships to areas of land and water. What the image also reveals is the age-old and powerful human relationship to the coast in the form of salt-harvesting. 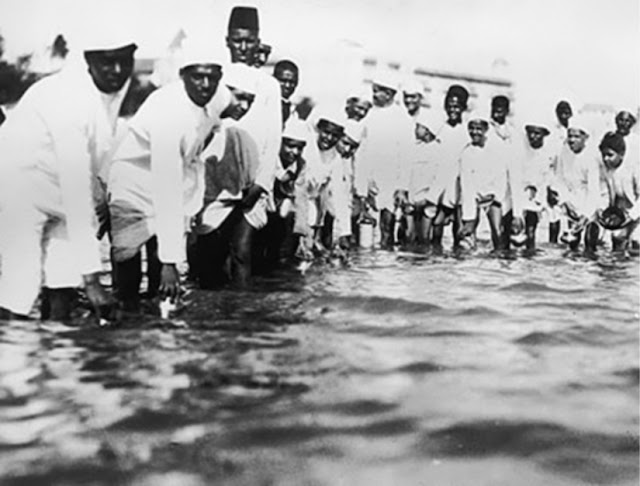 The Salt March was also called the White Flowing River because all the people who joined the procession were wearing white khadi.

“The whole concept of Satyagraha (Satya is truth which equals love, and agraha is force; Satyagraha, therefore, means truth force or love force) was profoundly significant to me.” Martin Luther King

Satyagraha (as 'insistence on truth') was later invoked in the context of resistance to the construction of the Narmada (Sardar Sarovar) Dam project in India, which involved large-scale resettlement.

The third 'pilgrimage' photograph:
‘Contemplating Joyce's scrotum-tightening sea, Sandycove’ photo of Joseph Beuys, 1974, Tisdall
(at the mouth or estuary of the River Liffey) 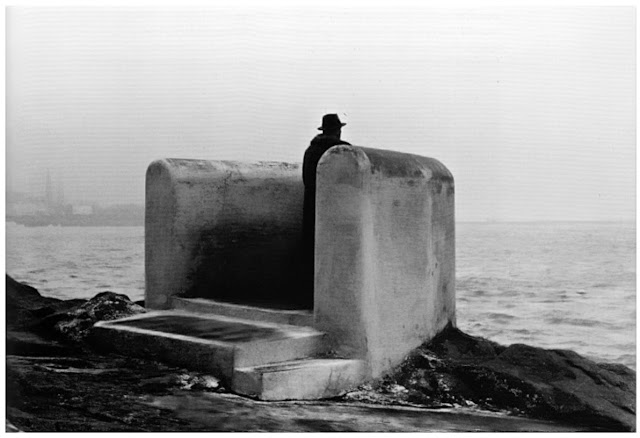 For me, this image holds and reveals (amongst other associations) Beuys' idea of ‘social sculpture’; the importance of myth, soul, symbolism and ancient shamanic thought; the Joycean epiphanies by the sea (at/near this location); or even his ‘thinking like a river’, as in Finnegans Wake, a book whose structure is influenced by the flow of the River Liffey.

When brought to bear on place-engaged creative activity, geopoetic possibilities and deep-mapping gestures can include: re-connections to place (or 'activations’); explorations of eco-symbolic materials; geopoetic augmented sculptural installations (including the ‘aliveness machines’); deep listening and walking; empowerment and countering procedures/authorities - “subvert the dominant paradigm” (a memorable quotation pinned up in the offices of Friends of the Earth, London, where I worked in the late '80s).

Searching for the hidden intrigue, I am drawn to the Aust Jetty...or what still remains of it (this also is a central setting for the Transgression film). It will be the location for a new performative intervention Stilt Life - Occupy The Intertide (alluding to the strategy - commonplace in many parts of the world - of dwelling above water, on stilt-houses). This is part of a broader focus on climate-change adaptation, or 'anticipatory adaptation', which accepts the inevitability of large-scale social disruption resulting from climate-change (especially sea-level rise). 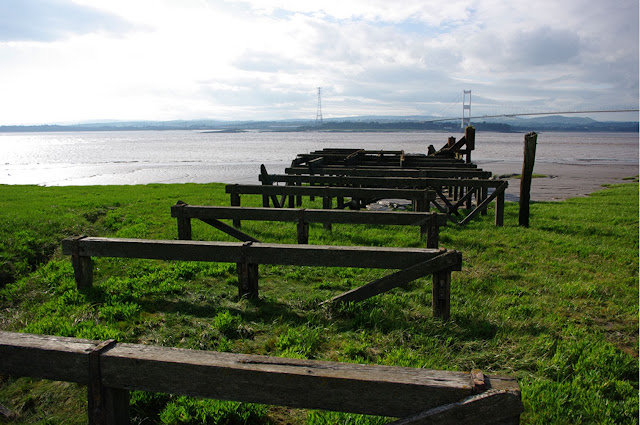 Here is my Transgression collaborator, Iain Biggs, speaking of "the overwhelming problem of our culture’s resistance to envisaging any form of change that is not controlled by humans and, closely linked to this, by the pervasive belief in a 'silver bullet' solution to all our problems – whether this is some technological invention or a change in the tax situation... It seems to me that the transgression we need more than any other is to transgress (‘exceed the due bounds or limits’) of a mind-set predicated on the assumption that we can “come up with” a solution to all our problems that will allow things to stay basically the same, with some minor adjustments – that is of this sub-set of the 'sustainable growth' mentality."

Stilt-Life is an attempt to suggest that what is now referred to as ‘coastal squeeze’ (due to rising sea-level - see image above) may engender responses other than the duality of  ‘hold the line’ or ‘managed retreat' - for these fluid territories. The former tactic is to protect with increased engineered defences; the latter being to abandon any/all human habitation etc, and allow the sea to - quickly or slowly - encroach. Stilt-Life highlights a more nuanced approach - an acceptance of, and an accommodation to, the inundation, with all the changes, uncertainties. Stilt-Life suggests adaptive habitation, arguing for (new) forms of 'hybrid' coastal living that involve stilt-based, and jetty-based ecological infrastructure, playing a role in strategies of adaptation, resilience and flexibility.

Intimate science is related to intimacy with the material environment, sitting between the cultural and the scientific: 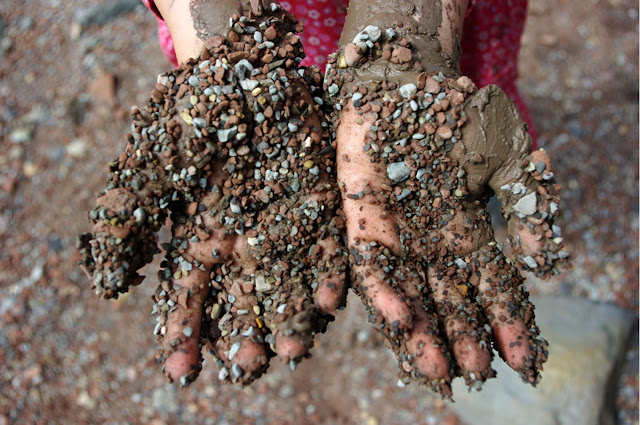 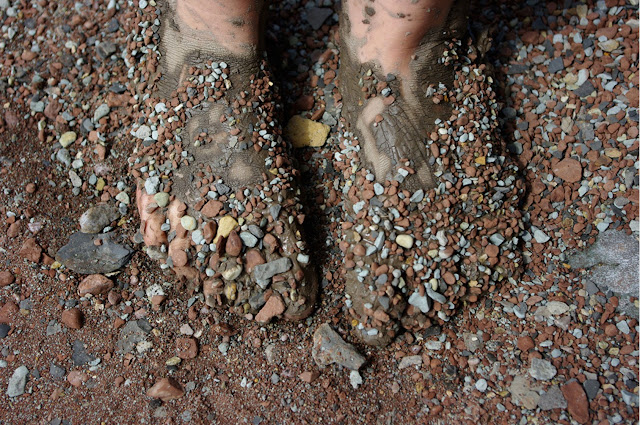 Intimacy, Responsibility, Empowerment - the essences of a hydrocitizenship (or hydrocultural)?

As reported previously, in a recent landmark case, a court in New Zealand conferred legal personhood on the entire Whanganui River system. The court ruling also postulates that the indigenous iwi people have very specific responsibilities for the river and watershed, caring for the river as a person.

The rivers of Europe also had their 'sacred' personifications - in the form of tutelary deities  For the Severn, it is Sabrina/Hafren, but also the god Nodens/Nudd/Nuada has a strong association. 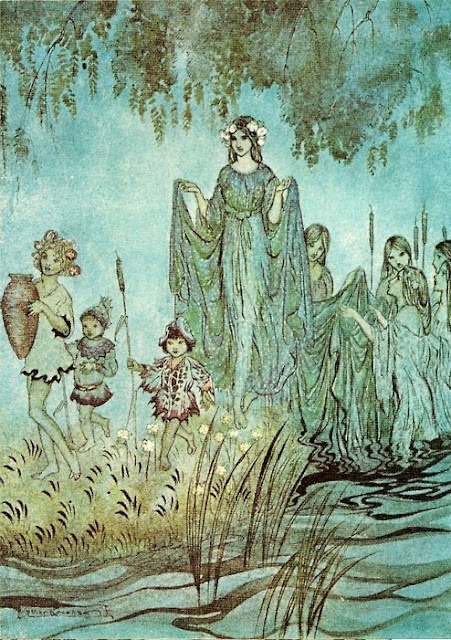 Some Stilt-Lives encountered in Amsterdam, July 2013: 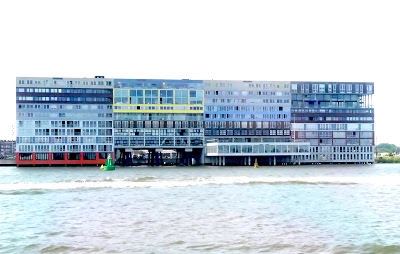 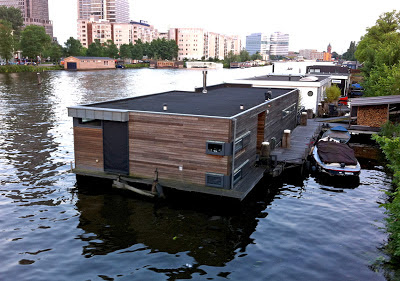 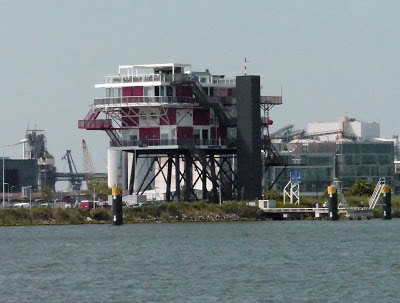 addendum 2...
Some additional images from the Dandi Salt March 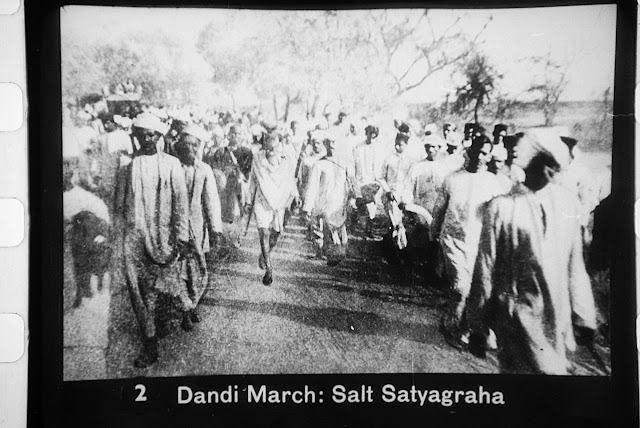 addendum 3...
FORESHORE, that part of the seashore which lies between high- and low- water mark at ordinary tides. In the United Kingdom it is ordinarily and prima facie vested in the crown, except where it may be vested in a subject by ancient grant or charter from the crown, or by prescription. Although numerous decisions, dating from 1795, have confirmed the prima facie title of the crown, S. A. Moore in his History of the Foreshore
contends that the presumption is in favour of the subject rather than of the crown. But a subject can establish a title by proving an express grant from the crown or giving sufficient evidence of user from which a grant may be presumed. The chief acts
showing title to foreshore are, taking wreck or royal fish, right of fishing, mining, digging and taking sand, seaweed, &c., embanking and enclosing. There is a public right of user in that part of the foreshore which belongs to the crown, for the purpose of navigation or fishery, but there is no right of passage over lands adjacent to the shore, except by a particular custom. So that, in order to make the right available, there must be a highway or other public land giving access to the foreshore. Thus it has been held that the public have no legal right to trespass on land above high-water mark for the purpose of bathing in the sea, though if they can get to it they may bathe there (Blundell v. Calteral, 1821, 5 B. & Ad. 268). There is no right in the public to take sand, shells or seaweed from the shore, nor, except in certain places by local custom, have fishermen the right to use the foreshore or the soil above it for drawing up their boats, or for drying their nets or similar purposes.
See S. A. Moore, History of the Foreshore and the Law relating
thereto (1888); Coulson and Forbes, Law of Waters (1902). 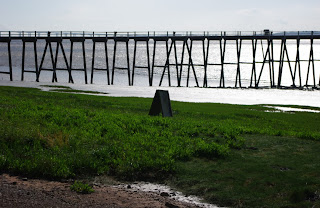