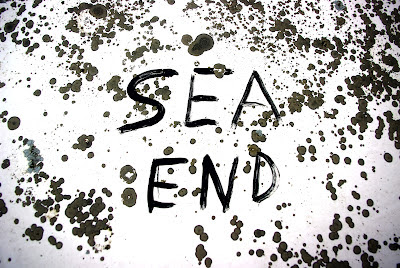 Immersed now on the Confluence Project with Jon Pigott, i-DAT and others. We're delving into some of the hidden or shadow realms of the Biosphere Reserve of North Devon. With the aid of innovative technologies, we're venturing beyond the range of our human senses, and fusing art and environmental thinking.

The investigations are taking place in and around the Torridge River and Estuary, so the theme of 'undercurrents' seems appropriate. As well as the literal meaning, there is the metaphorical sense of 'an underlying feeling or influence...not expressed openly'. One take on this, in the context of the River Torridge, is perhaps the idea of a mismatch between 'appearance' and 'reality' - as far as the eco-health of this Biosphere Reserve is concerned.
On the face of it, this is a picturesque, serene, wooded river valley setting, with a largely undisturbed, un-industrialised/un-urbanised estuary. However, below the surface, all is not well. Salmon and Trout numbers are in serious long-term decline. The very special (and now rare) freshwater mussel population, in the gravel beds of the river, has not produced any progeny in well over 40 years! (these mussels live a very long time, somewhere in the region of 100 years; and may therefore be a good indicator of aquatic environmental change over that lengthy timespan).
On this subject of bio-indicators, Salmon population numbers are often chosen as a good measure of the state of aquatic environmental health. If the levels are stable, then the likelihood is that there are few serious ecological problems in the river. The life-cycles/reproductive success - of both mussels and salmon - are strongly affected by sediment in rivers, and so Jon and I are planning to use turbidity sensors to get a handle on changing light-levels (murkiness) caused by clay/mud/soil being carried downstream, in suspension, from the huge land area drained by this river. Alongside this investigation, we are gathering lots of underwater video - another light dependent process.

In order to bring the whole landscape of the river catchment into play (rather than just the narrow, meandering river channel), we are also devising a way to measure, in real-time, the activity of another excellent bio-indicator - bats. These vespertine creatures forage for insects - on land and over the river - and their year-on-year variation in numbers can indicate when the ecosystem is, or is not, in a buoyant state of health. Pollution can affect their food supply (insects), and other environmental stresses can leave them more vulnerable to disease. When the bats start to decline, alarm-bells should surely be ringing.    WATCH OUT !   DANGEROUS UNDERCURRENTS !

We are working on ways - visual and audio - to reveal these undercurrents, to take the pulse of the local ecosystem - to literally delve into the shadows. The ecoids developed by i-DAT at Plymouth University form the core of the technology. These are adaptable and expandable - via custom sensors - to enable data to be collected and relayed over the internet. We will then be translating this flow of information, of numbers, into something more accessible, more sensuous, intimate - to enable us to listen to, observe, to feel what is happening 'out there', in and around the river. In a culture where we are increasingly de-sensitised and disconnected from our life-support systems, such attempts at re-connection are vital. We aim to make the data tangible, physical, a source of wonder, yet contextualised by rigorous principles of ecological science. As well as creating an exhibition installation, we are - with school groups and others - demonstrating how and why this data is collected and manipulated. The methods and technology are inexpensive and easily replicated. With curiosity, inspiration and imagination, anything is possible.

"In our epoch, and contrary to what occurred at the beginning of the 20th century, we are experiencing the de-professionalisation of instruments, their migration toward non-professionals, the re-instrumentation of the public, and the re-arming of amateurs – the ears of whom pass anew through the eyes, which pass anew through the hands. The mechanical re-organisation of perception taking place with the digital leads to the reconstitution of forms of knowledge held by audiences and publics. There thus comes to be formed a new avant-garde: one that constitutes new publics."  Bernard Stiegler, The Age of De-proletarianisation, 2010